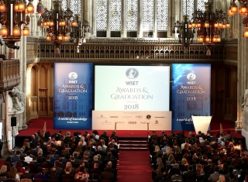 Over 500 wine and spirits influencers and professionals from across the world gathered last night at the historic Guildhall, City of London, UK to celebrate the annual Wine and Spirit Education Trust (WSET) Awards and Graduation where two graduates from South Africa were announced as achieving the coveted WSET Diploma.

Hosted for the first time by new WSET Honorary President, Steven Spurrier alongside WSET Chief Executive, Ian Harris, the occasion attracted attendance from industry leaders and long-standing WSET supporters including Marius Berlemann, Laura Jewell, Richard Paterson and Jancis Robinson. Two of the year’s 440 WSET Diploma graduates were South African and their achievements were celebrated as some of only 9 000 people in the world to have ever held the accolade. Graduates and award winners hailed from the UK and USA to China and Japan, representing the global reach and relevance of WSET qualifications.

Alison Sussex from Cape Town and Christie van der Heijden from Stellenbosch successfully completed the WSET Diploma and were awarded their certificates at the ceremony.

The WSET Level 4 Diploma is WSET’s highest qualification and recognised globally as one of the most distinguished achievements in the sector. The course develops an in-depth knowledge of wines and spirits, from production, regions and styles, and the global trade in wines and spirits. The Diploma is also universally viewed as the stepping stone to the Master of Wine qualification. Upon successful completion graduates receive a WSET certificate and lapel pin, and are able to use the post-nominal DipWSET and associated WSET certified logo.

Ian Harris, WSET Chief Executive, said, “Knowledgeable professionals and consumers are proving increasingly important for the future success of the wine and spirits industry. Thanks to the hard work of our educators, Approved Programme Providers and the WSET team the academic year 2016/17 marked 15 years of consecutive growth for WSET, with over 85,000 candidates worldwide completing a WSET qualification during the year. Our graduates and award winners come from all walks of life, both within the drinks trade and outside, and we’re proud to honour their achievements. We hope they will inspire others across the world to develop their education.”

As the student who achieved the highest overall mark across the WSET Diploma in his year, Moritz Mueller was the winner of this year’s Vintners’ Cup and Scholarship. Originally from Germany, Moritz now lives in the UK and studied his WSET Diploma at WSET School London alongside his high-flying job in the world of finance. He is one of the rare individuals outside of the wine and spirits trade to have won the accolade since WSET started offering courses to consumers in 1991.

Another honour presented on the night is the Riedel Trophy for the WSET Educator of the Year, awarded to the individual or company that has made a significant contribution to the delivery of WSET courses and qualifications. This year’s winner was Eno Cultura, Brazil. Thiago Mendes and Paulo Brammer set up Eno Cultura in Säo Paulo in 2013 and now run courses across the country. Impressive growth has been matched with excellent exam results and their introduction of scholarships has enabled more members of the trade to access WSET courses. They have also instigated several social projects across South America.

To learn more about WSET courses and find a local Approved Programme Provider visit the website at www.WSETglobal.com.