Yeast nutrition – can we predict the impact on aroma formation? 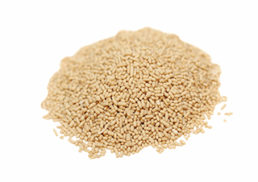 Yeast assimilable nitrogen (YAN), the compounds in grape must that can be used by yeast as a source of nitrogen, directly affects winemaking and wine quality. YAN consists primarily of amino acids (organic), ammonium (inorganic) and small peptides, and is highly variable in terms of concentration and composition. In healthy grapes, the amino acid concentration is generally significantly higher than ammonium, a relationship that is frequently inversed if ammonium (DAP) is used for nitrogen supplementation.

Recently, research interest has focused on the impact of nitrogen on the formation of fermentation derived aroma compounds, which include higher alcohols, esters and volatile fatty acids. The data generated by various research groups show that total nitrogen and the nitrogen composition directly impact the amount and the nature of aroma compounds formed by yeast. Furthermore, the data has also revealed the existence of complex interactions between different metabolic pathways. Consequently, the aromatic outcome of any given grape must fermentation remains largely unpredictable, and data from different research groups may present contradictory results.

We therefore decided to create a foundational data set that evaluates whether relatively minor changes in the concentration of a single nitrogen source in an otherwise complex nitrogen medium (i.e. all other amino acids and ammonium are present in fixed amounts) would result in a significant change to the overall aroma profile. Such a data set can form the foundation for a broader predictive model of aroma production in any given grape juice. The data shows that such minor changes indeed already directly impact the concentration of aroma impact compounds, indicating that better calibrated nitrogen nutrition has tremendous potential to direct aroma and flavour formation in desirable directions.

Fermentations, mediated by VIN13 (Anchor Yeast, Cape Town, South Africa), were conducted at 20°C without agitation in synthetic grape must, containing 200 g/ℓ of sugar and 200 mg/ℓ nitrogen (YAN). The nitrogen composition (Table 1) consisted of 50 mg/ℓ ammonium chloride and 150 mg/ℓ of all the amino acids, where each amino acid provided equal amounts of fermentable nitrogen. A single branched chain or aromatic amino acid was either absent (0) or present at twice (2) the concentration of the other amino acids. 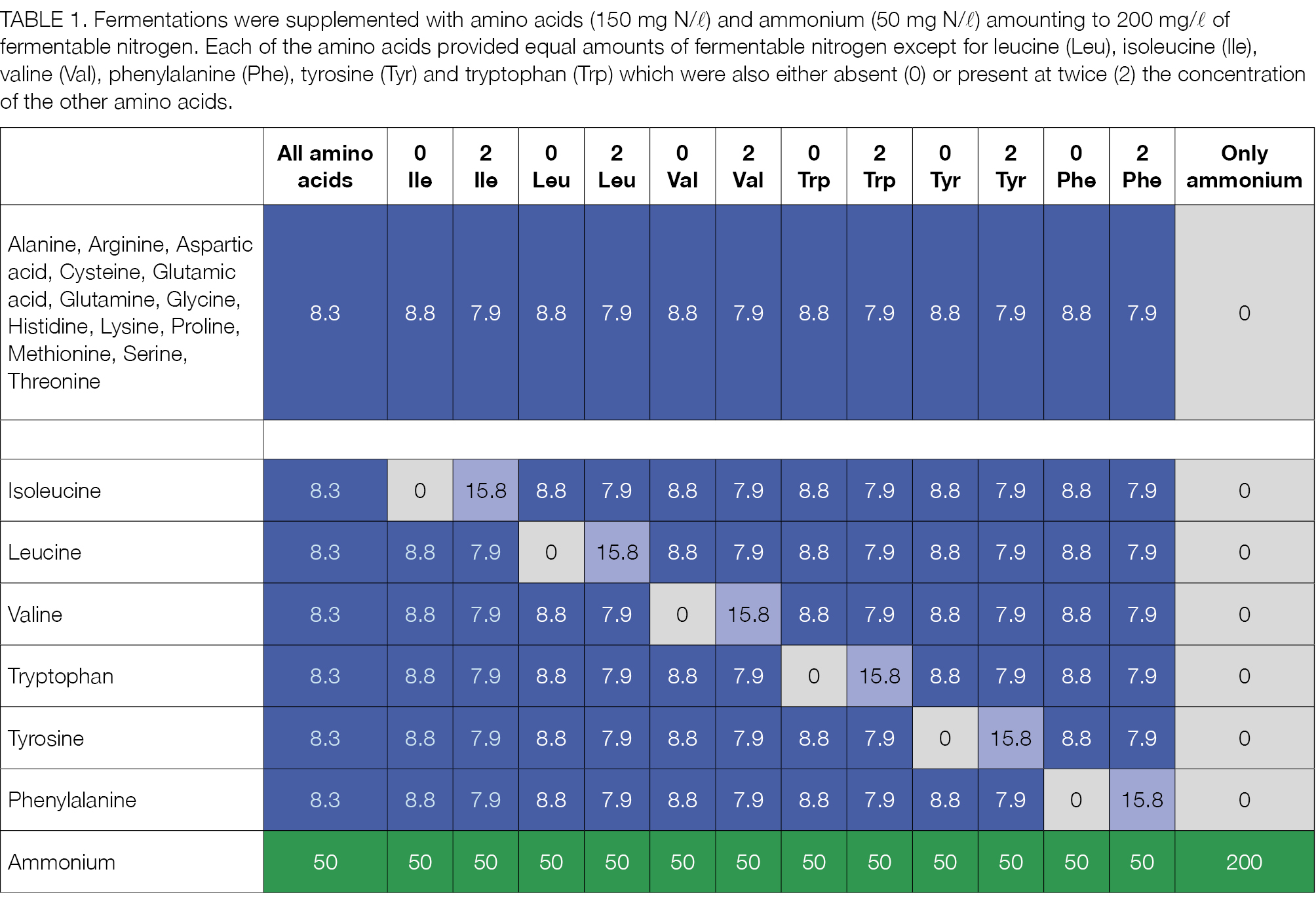 The impact of minor changes to the amino acid composition was evaluated by varying the concentration of one branched chain (leucine, isoleucine and valine) or aromatic amino acid (phenylalanine, tyrosine and threonine), while keeping the other amino acid levels constant. The concentrations used are within the range found in natural must, and the data therefore reflects a realistic picture of the impact of such changes.

The data (Figure 1 and 2) clearly indicate that individual amino acid changes cause significant changes in the production of the compounds associated with their catabolism. Branched chain and aromatic amino acids are metabolised via the Ehrlich pathway (Figure 1A and 2A), resulting in the production of higher alcohols and fusel acids, which in turn give rise to the formation of acetate esters and volatile fatty acids. Valine catabolism produces isobutanol, described as fusel, alcoholic, or medicinal, and isobutyric acid, described as rancid, cheese, sweat and butter (Figure 1B and C). Compared to the all amino acid treatment, the absence of valine resulted in a 24% reduction in isobutanol and a 12% decrease in isobutyric acid. When the valine concentration is double that of other amino acids, a 79% increase in isobutanol and an 80% increase in isobutyric acid was observed. 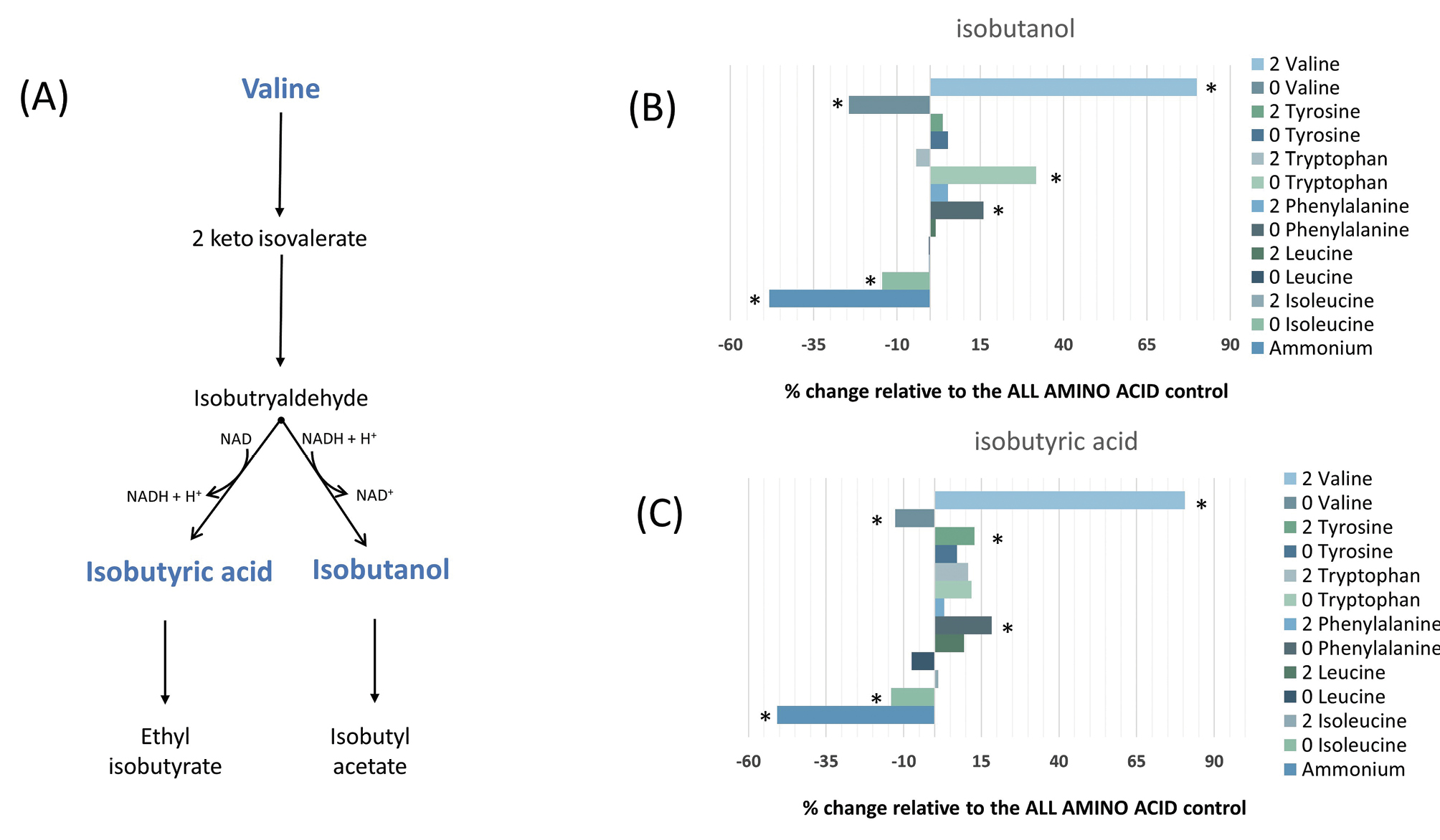 FIGURE 1. Valine metabolism pathway (A), and its products isobutanol (B) and isobutyric acid (C). The impact of the absence (0) or twice the concentration of nitrogen (2) provided by branched chain and aromatic amino acids on the production of volatile compounds. The asterisk (*) indicates treatments that differed significantly from the all amino acid treatment control. 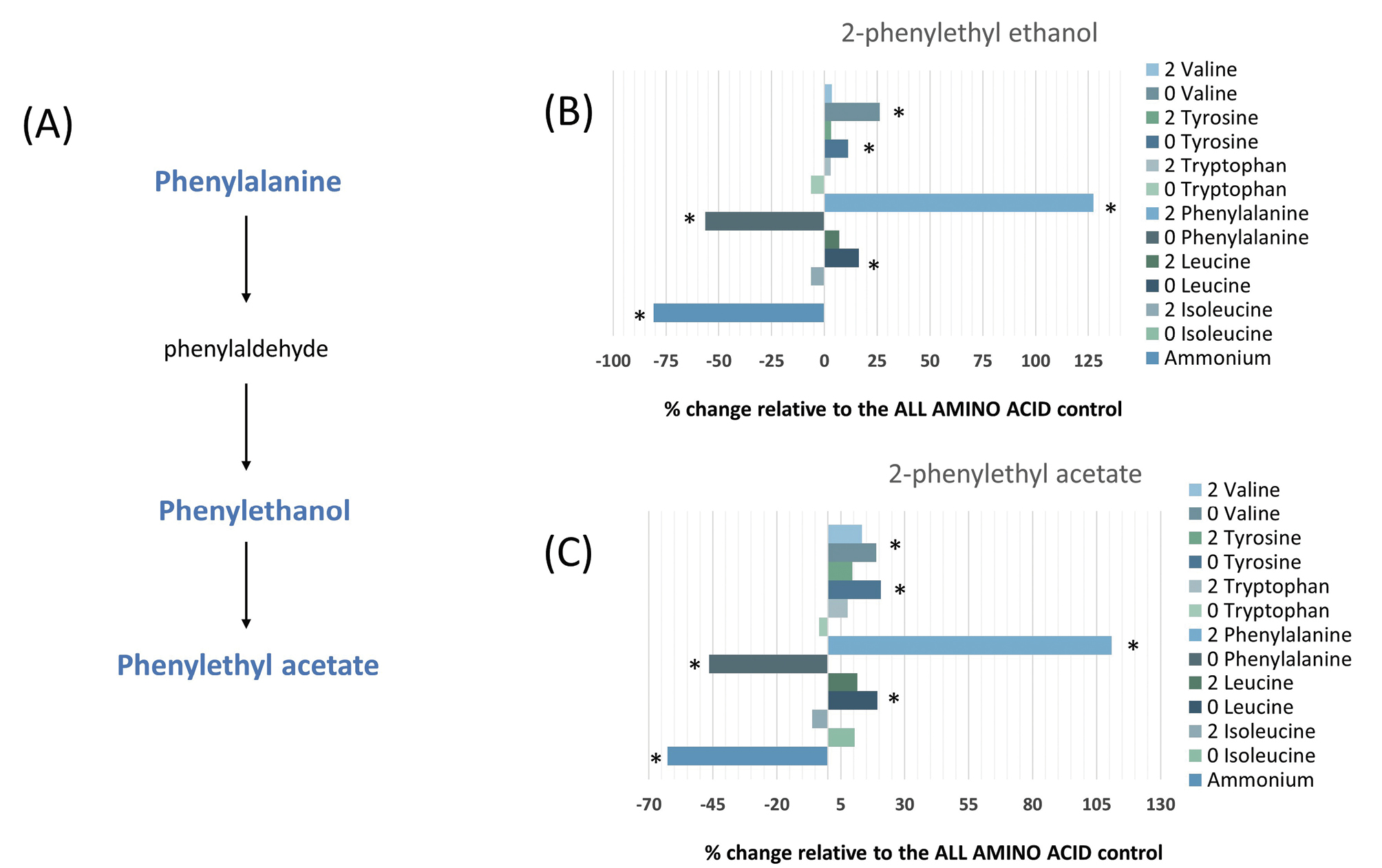 FIGURE 2. Phenylalanine metabolism pathway (A), and its by-products 2-phenylethyl alcohol (B) and 2-pehnylethyl acetate (C). The impact of the absence (0) or twice the concentration of nitrogen (2) provided by branched chain and aromatic amino acids on the production of volatile compounds. The asterisk (*) indicates treatments that differed significantly from the all amino acid treatment control.

The ammonium only treatment also resulted in a decrease in the production of isobutanol (48%), isobutyric acid (50%), 2-phenylethyl alcohol (80%) and 2-phenylethyl acetate (62%). This is somewhat expected as the yeast would have to produce all amino acids it would require for survival.

Wine quality relies on the successful completion of alcoholic fermentation and the production of desirable flavour and aroma compounds. Wine aroma is highly complex, due to the presence of thousands of compounds interacting with each other suppressing or enhancing the perception of individual compounds.

In the past, nitrogen deficiencies were prevented or treated by supplementing the total YAN with diammonium phosphate (DAP), but now commercial nutrients containing amino acids are also available. The data show that the ammonium only treatment resulted in a reduction of several of the volatile aroma compounds, as well as elevated levels of others (data not shown), and that increases in branched chain and aromatic amino acids resulted in increased levels of catabolic by-products. A balance between organic (amino acids) and inorganic (ammonium) nitrogen sources is essential, as excess levels of either may have a detrimental impact on aroma. The composition of nutrients containing amino acids is ill-defined, but they provide approximately 16 mg/ℓ of YAN (30 g/hℓ). These comparatively small YAN additions are in-line with the amino acid composition changes evaluated in this work.

Although the relationship between YAN composition and aroma production is not linear, the significant responses to amino acid composition changes does warrant further exploration to establish more accurate non-linear prediction models. Furthermore, this highlights the importance of determining the amino acid composition of grape must prior to inoculation, to adequately inform subsequent nutrient applications. This is currently costly, but with new emerging technologies, these analyses will become routine in the not-to-distant future.