Young Farmer of the Year 2019: “To listen and learn is key to success” 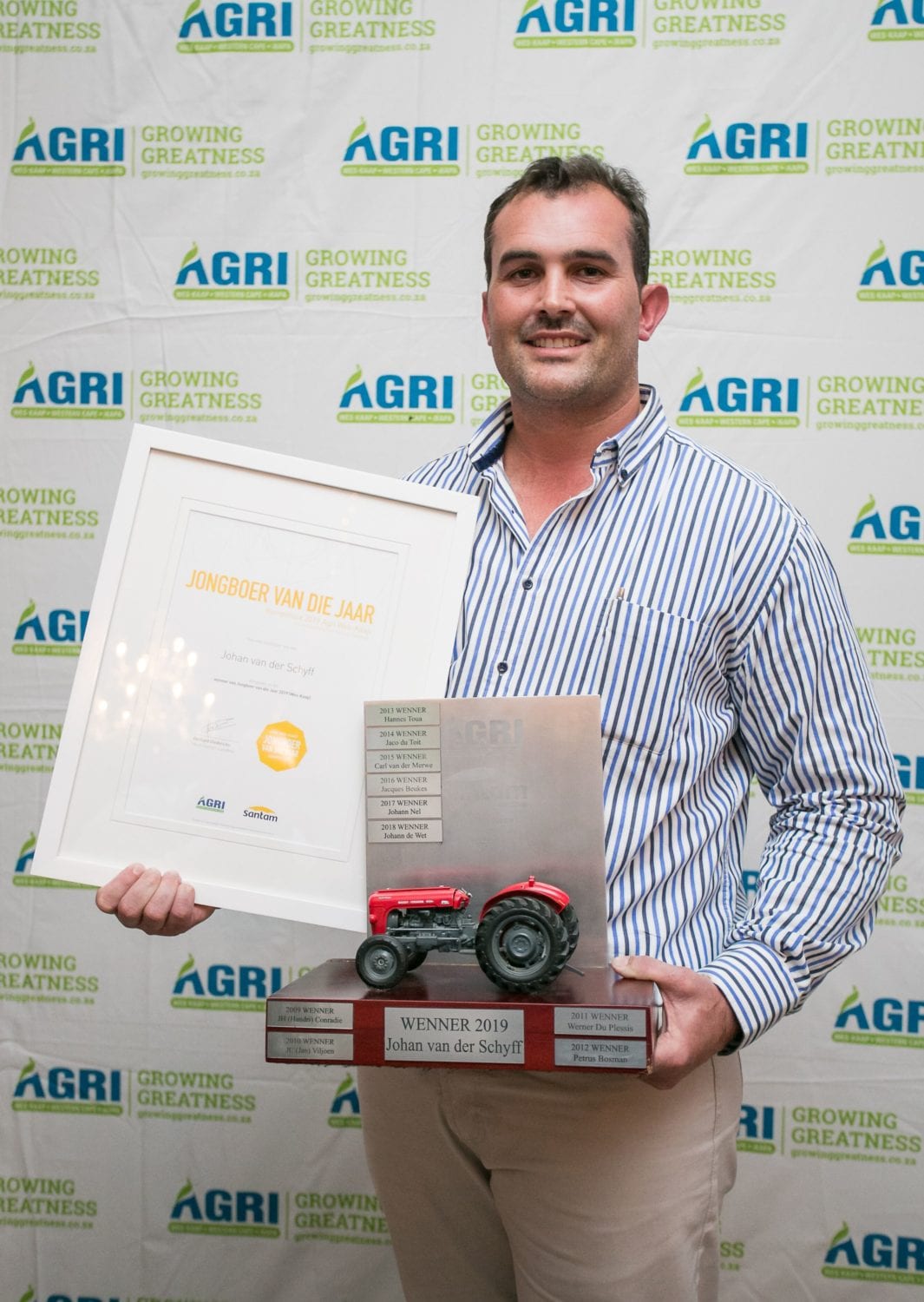 Johan originates from the farm JJ van der Schyff and Sons in Plettenberg Bay, and has been farming with angora, merino, stud and lambs for more than 18 years.

But the farm’s biggest bifurcation is the egg production unit that Johan’s father started in 2000 (Johan’s matric year) with 100 000 hens. Johan took over from his father in 2001 and expanded the farm’s capacity to 220 000 egg-laying hens. In 2006, Johan established his second farm in Humansdorp with four henhouses. Today, he has 11 henhouses with 250 000 egg-laying hens on his farm.

In 2012, Johan established an egg distribution depot in Kraaifontein from where 1 million dozen eggs are distributed every month. He also exports eggs to Angola and Namibia. In addition, Johan butchers around 1 500 lambs per months from the feedlots that he started back in 2000.

According to the judges, the business has more than tripled under Johan’s control and he has successfully ensured that the economy of scale-benefits were utilised. His strict focus on quality and service to his clients also impressed the judging panel.

Q: What does this Agricultural Young Farmer of the Year award means to you?

JvdS: To be honest, I’m a bit speechless. It’s a real dream come true. The award is a big deal and it means a lot to me. It actually makes me more motivated and determined to go back to my farm and farm even better.

Q: In your mind, what contributed to you winning this award?

JvdS: I think I won because of my passion for farming. I’m extremely passionate about my business and I believe it to be the reason why my business keeps on growing. I think the judges picked up on that…

Q: From a technical aspect, what do you think the judges looked for?

JvdS: The judges most certainly looked at the contestant’s managerial skills and how we applied it in our farming operations and practices. Their decision wasn’t based on the size of your operation or the condition of your farm. They were more interested in the general, overall management of your farm operation, taking into consideration finances, risk management and several other key elements. I think the decision was based on a combination of all the managerial aspects.

Q: What advice can you offer other aspiring young farmers?

JvdS: I’ve always been a person willing to learn. The ability to listen and learn is a very important characteristic I think every farmer should possess. We, as young farmers, should learn from our elders. They provide us with good direction. Don’t think you know everything, be willing to listen and learn. I’m also a firm believer in innovation and technology. I run my business in such a way that I ensure I never fall behind when it comes to technology. Make sure you grow with technology. It’s a big factor in my business.

JvdS: My priority is not to grow bigger, but to farm smarter and more efficiently. The goal is to establish my farm as the preferred egg supplier in the Western and Eastern Cape.