Africa has always been the continent of the brave and one brave producer is looking to bring back the golden era of Zimbabwe wines, after years of the country being in a depression. Bushman Rock Wine Estate’s owner, Jonathan Passaportis, is set to turn pre-conceptions of its country’s wine quality on its head as it starts to lay foundations for sparkling wine production next year and bring the wow factor of tourism into play to boot.

Zimbabwe was once a country renowned for delicious vino, but that all changed following what many describe as a punishing era of sanctions and the erosion of agriculture. The future of sparkling wines from this once booming nation of Zimbabwe was hard to predict.

Now things could change. There’s a new government since November 2017, one keen to adopt an entrepreneurial spirit. Wineries like Bushman’s Rock are looking to take up the challenge of producing the kind of bubbly that will put the country back on the wine map. Jonathan’s story is one the triumph of passion over profit and a love of wine that has outlasted challenging times. 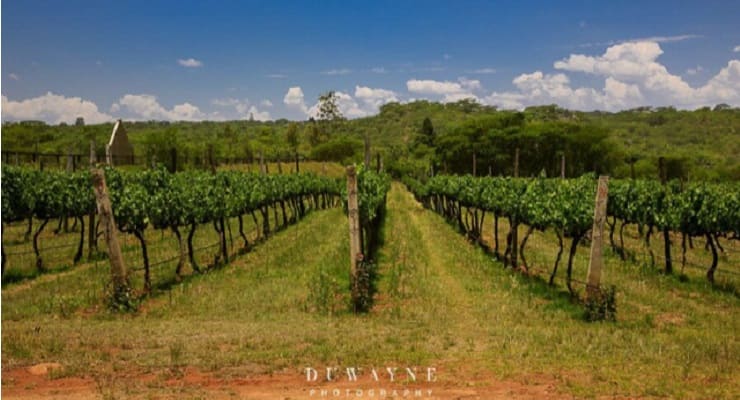 Then throw in Jonathan’s love of tourism, Bushman Rock is a travel destination in its own right, a classic African lodge, set between a forest, a lake, game reserve and rolling hills, kissed by the sun and fresh air, to really reveal what good wine is all about.

One cannot talk about Zimbabwean wines without addressing the recent past. The past two decades have seen the reduction of vineyards from between 12 to 20 wineries in 1999 (with more being planned and planted) to four currently in production (with two of the three scaling their vineyards down).

“However, there is absolutely no reason that vineyards and wine production cannot return to their previous place in Zimbabwean agriculture,” Passaportis says. He adds that the long term nature of vineyards does mean that there will be no sudden boom of grape planting. “However, as the economy improves the wine market will continue to grow, resulting in increased margins for local producers which in turn will attract more growers.”Passaportis says that Bushman Rock delivers fruity and flowery tones in their wines with salty and mineral accentuation on some of the reds.

As the wine industry is so small there are no supporting industries surrounding it.  From basics such as filter paper and bottles through to the more specific such as agronomy services and implement production Zimbabwean winemakers are left stranded.

“There have been no improvements to machinery or production facilities in years and the few wineries in Zimbabwe make do with fertilizers designed for coffee production and sprays designed for use in the Western Cape of South Africa – a region that differs greatly from us here in Zimbabwe,” Passaportis says.

On the retail and marketing side of the industry, scale is proving an issue too.  The wine industry in Zimbabwe historically centred around two organisations – AFDIS and Mukuyu.  These organisations performed the function of a “co-op’ ensuring that individual grape growers had the adequate support and a constant market.

As Zimbabwean wine production declined due to various factors these organisations had to rely on supplementing their production with imported South African product.  The reliance on imported product is now ingrained in our organisational culture and without large scale investment in local production, this will remain the case for a long time to come.

Passaportis says that although not restricted to the wine industry, the loss of  human “wine” resources was almost catastrophic to the industry.  “Generational knowledge has evaporated and any problems that arise within the industry now are treated as if they are ‘new problems’. Given the different climatic conditions that we exist in replacing this knowledge is going to be a long term goal,” he says.

There is no doubt that Zimbabwe has some of the most spectacular natural landscapes in the world. Huge areas of the country have been set aside for pure conservation and large quantities are dedicated to agriculture. Bushman Rock is inspiring in its beauty as the vineyards roll down to the calm lake and the indigenous forest covers the hills opposite.  “If ever there was a place to motivate creative winemaking this definitely is the place,” Passaportis concludes.