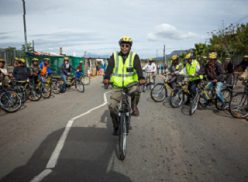 Volunteers are doing their bit for community safety.

Three neighbourhood watch organisations in the Paarl East area were given the first 50 bicycles built at Nederburg, home of the Qhubeka bicycle in the Western Cape. These bicycles are intended for distribution to vulnerable South Africans via various Qhubeka-affiliated community programmes. The bicycle assembly at Nederburg forms an integral part of Nederburg’s exclusive premium wine partnership with Team Dimension Data for Qhubeka.

Until recently patrols were done on foot, but now 50 volunteers for the Fairyland, Chicago and Hillside neighbourhood watch organisations are better equipped to fight crime. Volunteers received basic training in bicycle maintenance, repair and riding. The coaching was provided by master bicycle mechanics Beverley Roode and Janine Johnson of Bicycles and Beyond (BAB), a non-profit organisation that empowers vulnerable communities through cycling.

Roode and Johnson, who operate the bicycle assembly facility at Nederburg on behalf of Qhubeka, also undertook the training of four previously unemployed women from the local Paarl East community in the assembly of Qhubeka’s purpose-built bicycles. The women aim to assemble a minimum of 150 bicycles per month.