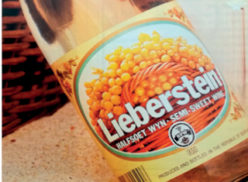 With sales of more than 31 million litres in 1964, Lieberstein sparked enquiries from wine-producing countries around the globe and became the world’s biggest-selling branded natural wine. Five decades on, we ask three leading wine personalities whether this marketing success can be replicated.

Asked whether it could be replicated five decades on, Carina Gouws, an independent wine consultant who conceptualised the successful modern-day wine brand Fourth Street says, “This will never happen again. In the 60s America neither produced nor consumed wine on a massive scale, Australia’s wine industry was small and New Zealand’s non-existent”. Carina reckons South Africa nowadays has got much stronger competition from other wine-producing countries.

However former SFW employee and local industry stalwart Dave Hughes doesn’t rule out a similar phenomenon. “It can happen again with an affordable brand among better-educated consumers,” he says.

SA National Wine Show vice-chairman Bennie Howard says the local wine industry should come up with a product that can compete with beer and cider price-wise. “Why do we export bulk wine at R2-3 a litre? If we come up with the right product it could rather be marketed locally at R6 a litre. Other African countries south of the equator, but also Nigeria, could form part of the target markets.”

The context during the Lieberstein era

Dave points out that prior to the launch of Lieberstein all local white wines were oxidised volkswyn. “However, a technical breakthrough increased the shelf life of natural white wine. Suddenly a light, still wine was available to the entire country – and the upcoming middle class in particular. When Lieberstein was launched nobody drank semisweet white wine, but people discovered it was palatable and they came on board. Also interesting to note, Lieberstein was one of the first wines with a screw cap.”

Timing was key to Lieberstein’s successful launch. At the time South Africans consumed brandy and dessert and red wines. Beer was not a major factor because it was either home-brewed or traditional African beer. There was also a lack of competition among local wine brands. Co-op production and favourable government policies played a big role in Lieberstein’s success. It was believed that wine, within reasonable limits, was a good, healthy beverage. Hence Lieberstein’s marketing slogan: “Anywhere, anytime.”

The local wine industry had outstanding people who’d studied at world-renowned institutions such as Davis University in California, Germany’s Geisenheim Wine Institute and Harvard Business School. They helped shape SFW into a fully fledged marketing organisation. Apart from marketing, it had research, technical and managerial strategies in place to develop the local wine market. Having been a mass-produced, low-priced, natural wine of consistent quality, Lieberstein became South Africa’s first wine that was mass marketed – especially in the old Transvaal. In the ’60s the Cape was not a big wine market. The money was on the Witwatersrand. “At one time Johannesburg was the world’s fifth- or sixth-biggest market for champagne,” Dave says.

This marketing and advertising drive created a tremendous nationwide public awareness. National demand for natural wine was created for the first time and it yielded rich dividends. Lieberstein captured more than a third of South Africa’s total wine market.

“The world has changed completely since those days and it’s still changing,” Dave says. “However, any new set of circumstances is possible. So it’s feasible that the perfect market juncture could present itself again to replicate the Lieberstein success.”

Parallels between the ’60s and today

Since 1964 South Africa’s population has increased by 190% from 19 million people to about 55 million. Despite its phenomenal 60s wine revolution, South Africa currently has a relatively low per capita wine consumption compared with other wine-producing countries.

In fact South Africa still doesn’t have a widespread culture of consuming natural wine. As in the ’60s, this provides a huge marketing opportunity.

“Relatively few South Africans knew about wines in the early 60s,” Dave says. “I did my apprenticeship in France and Italy in the 50s and even there very few people had a thorough knowledge of wine.”

Lieberstein was launched in 1959 with the aim of making wine more accessible to people who aspired to consume wine but had experienced barriers in terms of its taste, accessibility, price and exclusive or sophisticated image.

Can it happen again and what are we up against today?

According to Carina it will require a massive capital input to replicate Lieberstein’s success. “It’s not the will that’s lacking,” she says. “But the global wine market has become much more competitive with regard to distribution, finding the right partners and negotiating trade agreements.”

Since Lieberstein’s heyday, the local market has seen non-intimidating, successful brands such as Paarl Perlé and Autumn Harvest Crackling in the ’70s, Graca in the ’80s, Four Cousins in the ’90s and Fourth Street in the 2000s. “Last year Fourth Street sales in South Africa and other African countries reached 60 million litres, making it the world’s fastest-growing wine brand.”

But compared with the world’s top wine brand, America’s Barefoot, it’s still far behind in terms of volume sales. Barefoot sold 202,5 million litres in 2016 but as this was the same as in 2015, it showed a flat growth rate.

With a third of Barefoot’s consumers being new to the wine category, its managing team regards the brand as a gateway to the world of wine. This is exactly what Lieberstein achieved: It simply recruited consumers to the romantic wine category, rather than trying to establish a sophisticated image.

People are now more clued-up about good food and aware that wine contains alcohol and should predominantly be enjoyed with food, Dave says. He finds it encouraging that Zimbabwean waiters in local restaurants are staunch supporters of South African wines and favour them over imported wines. Several have moved on to become sommeliers in Gauteng.

Bennie believes existing wines should not be replaced by conceptualising a new wine brand which aims to replicate Lieberstein’s success. “The local industry needs to develop a product that adapts to current market conditions – probably a red wine. Our white wines aren’t a good match for braaivleis, pap and sous. In some countries the consumption of sweeter red wines has exceeded that of sweeter white wines.”

A modern-day Lieberstein brand could perhaps be Pinotage-driven, he says. “I’m not saying that other cultivars should be excluded. It could be a late harvest-style red wine with 50-80 g residual sugar and less alcohol and it should not age too long. I see it all over Europe, including Germany and the south of France. Also in Brazil they consume low-alcohol red wine of 9-10% alcohol per volume. We just have to find a way to consume such a new style of wine – probably with ice in warmer weather.”

Such a brand should be conceptualised from vineyard to consumer. “We should entice wine cellars who are able to produce volume at the right price,” Bennie says. “It will have to come from high-yielding irrigated vineyards and it could be an eight- to 10-year project before it reaches its peak.”