Cheers to 40 years of Cap Classique

Boschendal Estate, one of South Africa’s pioneering producers of Cap Classique which this year celebrates its 40th vintage of making this eponymous wine style, has underscored its reputation of quality for this category by winning a top 10 spot in the 2021 Winemag Cap Classique Report. The Boschendal Jean Le Long Prestige Cuvée 2009, a 100% Chardonnay Cap Classique with 10 years on the lees, took this top 10 spot with 92pts. Since its first Cap Classique vintage in 1981 – the second version of this wine style to be made in South Africa – Boschendal has over the past 40 years garnered a reputation for Cap Classique excellence among the discerning wine-loving public as well as the pens and scores of the critics.

The second annual Cap Classique Report convened by Winemag.co.za and sponsored by multinational financial services company Prescient attracted 83 entries received from 43 producers and these were tasted blind (labels out of sight) by a three-person panel, scoring done according to the 100-point quality scale.

According to Cathy van Zyl MW, one of the judges of this year’s Cap Classique Report, bottled-fermented sparkling wine is nothing if not a technically demanding category. “It might be the case that most Cap Classique gets drunk locally but theoretically it is up against not just Champagne but Prosecco, Cava and any other form of bubbly – mediocrity is not an option”. The Blanc de Blancs style dominated the Top 10 with seven of the wines consisting of 100% Chardonnay, including Boschendal Jean Le Long Prestige Cuvée 2009.

The Boschendal Grande Cuvée Brut 2015, a wine of origin Elgin, achieved a 91-point rating at the competition and was also among the top scoring wines. This vintage Cuvée with 51% Pinot Noir and 49% Chardonnay spent 36 months on the lees. 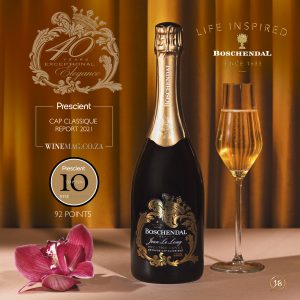 Shirley van Wyk, Boschendal’s Marketing Manager says, “To receive this recognition for Jean le Long and Grande Cuvée in our 40th anniversary of Cap Classique craftsmanship emphasises the profound role this category of effervescent wine plays within the Boschendal brand.”

“Under the stewardship of winemaker Danielle Coetsee, Boschendal is set to continue to produce some of the finest Cap Classiques in the country, wines that contribute to a category whose excellence is truly a sparkling jewel in the crown of South African wine.”

The judges report for this year’s Cap Classique Report describes the Jean le Long Prestige Cuvée 2009 as follows: “Complex and compelling aromatics – citrus and apple but also honey, ginger, liquorice and some yeasty character. The palate, meanwhile, is powerful and flavour-packed, vibrant acidity lending verve, the mousse still remarkably persistent. That extended period of lees contact has resulted in something quite particular.