Satellite “eyes in the sky” have become really useful tools to keep watch over crops.

This technology and its applications are considered increasingly useful by a growing number of producers and consultants alike who use FruitLook to help monitor conditions in vineyards and orchards.

FruitLook is an online tool that helps producers improve crop productivity and water use. Its satellite-derived data can for instance tell you how well your crops are growing, how much water it is using and also how effectively this is done. This is because the satellites “employed” capture details that are not always visible to the naked eye.

“FruitLook provides producers with spatial data based on the latest satellite information to analyse crop growth and water status, over time and space, as well as in different seasons,” explains independent researcher Dr. Caren Jarmain. The tool enables producers to identify areas with weak growth or crops under stress, she says. It can also help pinpoint particular areas experiencing water shortages.

This is possible thanks to the way FruitLook combines satellite-derived data with complex algorithms and weather data. The tool then “translates” it into user-friendly maps for producers. This offers unique “farming intelligence” to producers that is currently available for free, thanks to a subsidy from the Western Cape Department of Agriculture. At the moment FruitLook covers an area of about 170 000 ha and focuses on local deciduous fruit producing areas.

FruitLook’s datasets (growth, water and nutrient related) have proven valuable to many producers who use it to inform their farm management decisions, says Dr. Jarmain. Some use it to detect disease-ridden spots in orchards. Others employ it to evaluate water use and efficiency over large areas. Many also testify that it is helping them to reduce costs, including what they spend on pesticides and irrigation.

FruitLook-derived data is provided at a 20m x 20m spatial resolution, showing detailed variation across orchards and vineyards. It measures different features that basically visualise the growth and status of your crop (see graphic). This include indicators of crop performance, how vigorously fruits or vines grow and how much foliage it carries. Variations in biomass production between and within different blocks are also visible in these datasets. 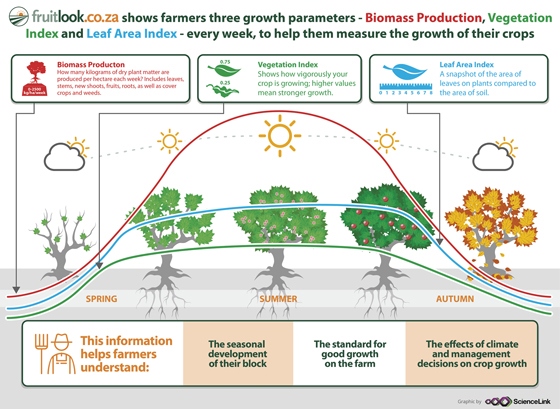 The data on biomass production presents the total dry matter increase of your crop in kilograms per hectare during a specific week. This includes the growth of roots, shoots, fruits, leaves and even the cover crop or weeds in your field. “It is strongly influenced by crop management and block characteristics, as well as the weather,” explains Dr. Jarmain. “Younger crops will produce less biomass than full bearing crops. Biomass production is also normally lower at the beginning and end of the season: at the beginning of the season the crop is not yet fully developed. At the end of the season the leaves start colouring, chlorophyll breaks down and the fruit crop enters a period of dormancy. Weather conditions and seasons also have influence: in the midst of summer solar energy, used for photosynthesis, is more abundant than in spring and fall.”

Môreson Trust, a large fruit producer situated near Villiersdorp, has used FruitLook to help inform irrigation practices and to help tackle pest problems in some of its orchards. For an example of the kind of steps involved in this process see graphic. By keeping an eye on biomass production (and other FruitLook datasets) it helps Môreson’s employees to monitor seasonal changes, impact of treatments, as well as growth in different areas. 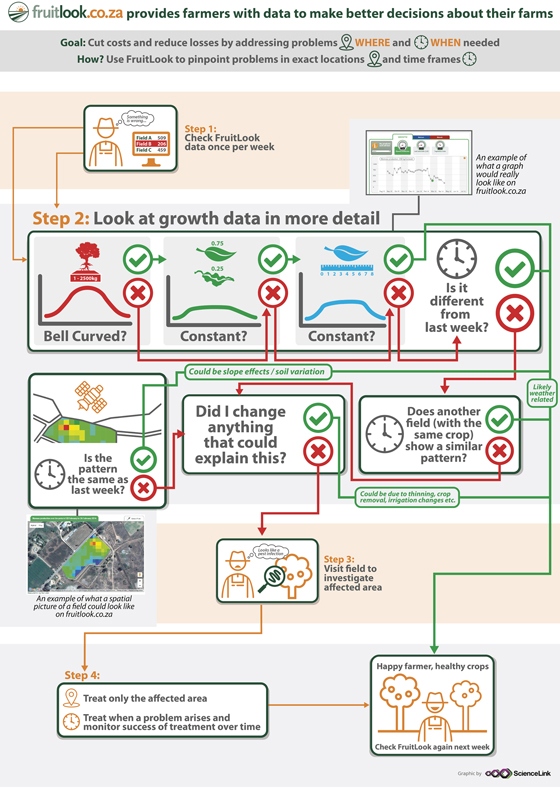 Says Kobus Swanepoel from Môreson Trust, “We have used FruitLook to delineate areas where diseases affected plant growth. We also targeted our sampling and pesticide treatment in that area. FruitLook for instance showed relatively low biomass production in a certain block in 2012 which corresponded to the spread of nematodes in it. This helped us to only treat the affected area and ensure savings of maybe 75 – 80% of pesticides used in that block.”

Jacques Crous, a horticulturist from First Fruits Consulting, has had a similar experience with FruitLook helping to identify problems in his citrus orchard successfully. He considers FruitLook’s growth data a “useful indicator” of an orchard’s or tree’s ability for photosynthesis.

Crous experienced problems within a particular Eureka orchard established in 2013 on a family farm in the Nuy Valley. “The biomass in the orchard dropped for no apparent reason,” he says. “I was away on leave for 10 days and on my return clearly noticed this trend in the data. We investigated and discovered high infestation of thrips (a citrus pest) in the orchard.

“Although we immediately applied a pesticide, the biomass production, according to FruitLook’s parameters for it, was still down for about three weeks after this. This was because of the loss in new growth, as well as permanent damage to the remaining young flush. FruitLook definitely helped unravel the mystery behind the biomass loss at the time. It also helped to quantify the long-term effect of this pest if not controlled in time,” he says.

Although FruitLook cannot tell you what causes lower biomass production on your farm, it can give you a very good idea where to look for reasons for your problems. Says Crous, “FruitLook enables producers to compare orchards or vineyards with similar profiles, as well as at different times with each other. Monitoring is key and this is why looking at growth data weekly is useful to show any outliers.” Every crop also has a unique seasonal growth curve and this is reflected in the FruitLook data. “If this curve changes there must be a reason why the tree cannot photosynthesise to its optimum capacity,” he points out.

Crous considers FruitLook “particularly useful” to help eliminate variation in orchards. “Farmers generally strive for homogeneity within a block, since this would suggest uniformity in production. FruitLook helps identify the extent of spatial variation in an orchard. However, it cannot directly explain the causes for the variations visible. The user has to come up with his or her own interpretation.”

Water use and biomass

In the Breede Valley region Petrus Steyn from VillaCrop Protection has used FruitLook to monitor growth in young orchards, as well as identify sections in blocks that are receiving too much or too little water due to irrigation practices. FruitLook’s data can also help producers to identify poorer producing vineyards or orchards and improve its management accordingly, he says.

“We had an example in the Robertson region of a new peach orchard with stunted growth in the early season, for no apparent reason. FruitLook’s data showed its most vulnerable spots being very similar to those in an old infested orchard in the same area that was removed three years earlier. We interpreted this as an indication of replanting problems and it helped us to identify the reasons for it. Taking nematode samples then confirmed our suspicions. Thanks to FruitLook we treated the (infested) area early enough and none of the crops were damaged.”

In this case FruitLook in combination with block inspections and sampling helped to detect a difference in the growth vigour of the new trees early, he says. “This enabled us to focus on the area that was also previously infested, adjust our pesticide use strategy accordingly and also to prevent fruit damage early in the season. The area now has good production and FruitLook contributed to this through timely observations.”

Another application of FruitLook’s data on biomass growth is to use this information in combination with its datasets on evapotranspiration deficit (an indicator of plant water stress). This is useful for the placement of for instance soil moisture probes.

Jaco Engelbrecht, viticulturist from Paarl, looks at FruitLook’s evapotranspiration data (related to water use) in addition to its growth features. He uses it to identify event-based problems within the vineyards (for instance irrigation problems). “FruitLook helps us to adjust our management practices at the time when the plants need it the most,” he says. “We try to adjust our irrigation scheduling (in relation to FruitLook’s data) to avoid spikes or drops in biomass production.” FruitLook can also help clarify why yields in one vineyard are higher than in the other or what the effect is of irrigation scheduling on crop growth.

Others like Karin Cluver, manager of the fruit section on the De Rust farm near Grabouw, employ FruitLook’s parameters for biomass production, water use efficiency and evaporation deficit. Cluver compares these datasets weekly and uses it to identify any emerging problems, including non-efficient growth in blocks throughout the season. “I find it particularly useful to look at historic data from previous seasons and compare blocks and the effect of different management practices in them. If you understand your farm and monitor it regularly, it is easier to find reasons when something changes significantly.”

Using biomass and water use parameters have enabled De Rust’s team to use approximately 20% less water than before, she points out. This is because they can now monitor if the orchards are for instance irrigated too much, especially during the early season. “The data enables us to constantly re-evaluate our crops’ growth development and how much or how little water we are giving.”

Cluver also considers FruitLook useful to help interpret direct farm observations and to inform management decisions when it comes to disease control and irrigation scheduling. “It has given us access to a bigger picture, but you still have to interpret the data. You have to go into the field to ascertain why particular results were achieved,” she stresses.

Distell uses FruitLook’s growth indicators to buy grapes of the required quality, as well as to keep certain grapes apart for making top quality wine. According to Isabel Habets of Distell it is also useful to monitor growth differences between blocks and press grapes accordingly. Distell uses it to monitor if a block or a section of it is not doing too well and to make suggestions about changing irrigation practices.

These and other examples emphasise how FruitLook can help inform producers working towards precision agriculture, Dr. Jarmain believes. “In the process it can help producers to improve efficiency on farms, something that is increasingly important given resource scarcities and production pressures. “FruitLook helps farmers understand the effects of farm management on their crop, since information is updated on a weekly basis and farmers can see the results of actions taken.”

In Part 4 we will look at how FruitLook is used to inform water management in local vineyards and orchards.