In 2017 Vinpro launched a new technology transfer project, namely the Gen-Z Vineyard Project. The objective of this project is to establish various types of demo plots, for example new cultivars and clones, rootstocks, trellis systems, pruning systems and viticultural practices in existing commercial vineyard blocks on producers’ farms. The sites are subsequently visited on farmers’ days to demonstrate the results/measurements and discuss them with producers.

As part of the Gen-Z Vineyard Project altogether 16 cover crop demo plots were established in wine producing vineyards throughout the Western Cape in 2017 and 2018 (Photo 1). Two seed companies, Barenbrug and Agricol, donated the seed and their agronomists made recommendations about the cover crops and mixtures that can be established in the various regions. They also assisted with the evaluations and discussions on farmers’ days (Photo 2) that were held at some of the demo plots.

In 2017 the drought unfortunately resulted in very poor growth, but good rain during the post-harvest period and early winter of 2018 produced excellent results. Here are some of our most important general observations with regard to these plots:

–  Forage barley (Moby) – establishes and grows quickly at the start of the season. It was the best cereal cover crop established on its own. Sowing rate: 40 – 45 kg/ha.

–  Forage rye (Barpower) – performed well, especially in a mixture with vetch. It is a cheaper and often better alternative to triticale. Sowing rate: 35 – 40 kg/ha.

–  Phacelia – a brand new cover crop that was established for the first time this year and looks very promising. It is exceptionally drought tolerant and produces good material. It will be further evaluated in forthcoming seasons. Sowing rate: 3.5 – 4 kg/ha. 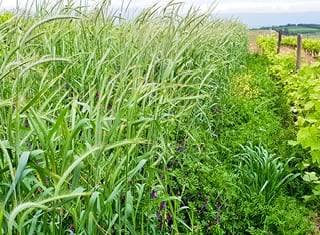 Some of the results, findings and/or recommendations from the demo sites can be found in future on the Gen-Z website (www.genz.co.za), which is currently under construction.

Our producers/farm managers who hosted these demo plots. Barenbrug (Jaco Kellerman and Ivan Jansen van Rensburg), as well as Agricol (Christof Muller) for the donations, advice, time and involvement in farmers’ days.