Lessons to be learned from Israel’s desert agriculture*

Netafim South Africa organised a technical tour to Israel for producers and industry role players. The purpose of the tour was to learn more about Israeli agriculture with regard to water management.

Israel is a Middle Eastern country bordered by the Mediterranean Sea between Egypt and Lebanon. Slightly larger than the Kruger National Park, the country spans 22 770 km2 with a border length over 1 000 km. Israel has a Mediterranean climate in the north with average annual rainfall ranging from 500 to 700 mm per annum, whereas the south is arid with average annual rainfall ranging from 200 to 230 mm. Israel is home to over eight million people who consume nearly 1.91 billion m3 of water each year. The only fresh water source is Lake Kinneret (the Sea of Galilee), which is fed by the Jordan River.

Mekorot, the national water company, is responsible for delivering drinking and irrigation water to the whole of Israel. This is achieved by more than 600 pumping stations and over 12 000 km of large diameter pipelines, known as the National Water Carrier. Lake Kinneret acts as the fresh water reservoir for the National Water Carrier and is supplemented by desalinated seawater from the Mediterranean Sea. Desalinated water supplies two-thirds of Israel’s urban water use and is in some cases used for irrigation water. Treated municipal and industrial wastewater constitutes 32% of the irrigation water allocated to agriculture. The largest wastewater treatment facility, i.e. Shafdan in the Dan region, recycles 380 000 m3 of wastewater per day. It uses advanced mechanical-biological systems for purifying wastewater. The Negev receives 70% of its irrigation water from the Shafdan treatment plant. Treated wastewater is pumped into an infiltration basin as part of soil aquifer treatment. The aquifer is replenished with treated wastewater from the Shafdan. Water is then abstracted by means of boreholes and utilised in the Negev desert. The Shafdan plant is autonomous and powered by methane gas, generated by microbial reactors. The organic solid waste is dried and given cost-free to growers to use as organic fertiliser.

Producing agricultural crops in Israel is quite expensive due to high labour, irrigation water and energy costs. Labour is often imported from foreign countries and minimal tillage is used to cut down on fuel expenditures. Although production costs run high in Israel, the growers are protected by extremely strict importation regulations, which ensures a higher degree of food security for the whole country.

A number of research stations were visited throughout Israel. The Netafim Orchard and Vineyard Research Centre focuses on delivering knowledge about drip irrigation technology. The centre also offers training on subsurface drip irrigation, maintenance, irrigation control and fertigation. Wine grapes are irrigated by means of subsurface drip, which is 30 cm below the soil surface (Photo 1 and 2). The reason for this is to minimise damage to the pipes caused by implements and animals. It must be noted that subsurface drip is not considered as a means to reduce evaporation losses. The Israeli growers implement regulated deficit irrigation (RDI) by means of the pressure chamber. They apply irrigation when the mid-day stem water potential reaches -1.2 to -1.4 MPa. The rationale behind RDI is to keep the grapevine under moderate stress to reduce vegetative growth, which in turn lowers transpiration. It is also suggested that RDI enhances wine characteristics. Interestingly, they only control weeds on the grapevine row to reduce herbicide costs (Photo 2). 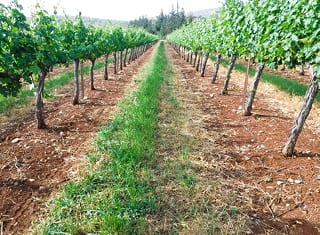 PHOTO 2. Wine grapes irrigated by subsurface drip from the centre of the work row. Note that herbicides are only applied on the vine row.

The Agricultural Research Organisation (ARO) has six research institutes and four research stations spread throughout Israel. The Gilat Research Station is situated in Israel’s northern Negev at approximately 150 m above sea level. This research station comprises three main research units for Plant Sciences, Soil and Water, as well as Plant Protection, respectively. During the visit, the tour members had the opportunity to learn more about current research projects and trials. One of these trials is an almond nutrition and physiology study. Almond trees are grown hydroponically, i.e. without soil by applying a nutrient solution over the course of the day. The aim of the study is to evaluate the effect of nitrogen, phosphorous and potassium levels on plant physiology. Although the trial is almost two years ongoing, the differences in growth habit are evident (Photo 3).

The tour also included a visit to the Ministry of Agriculture’s research institute in the Jordan Valley. At this particular institute, the local research focuses on soil, irrigation and netting, as well as technology transfer. This region produces table grapes, vegetables and even bananas. In spite of the extremely high salt content of the soil in the Jordan Valley, i.e. around 9 dS/m, table grape yields average 25 ton/ha. However, this is 50% of the production around Tel Aviv. Dan-ben-Hannah is a favourite and is commonly cultivated with drip irrigation under 50% shade net. The high soil salinity also requires a high leaching fraction, which causes producers to irrigate around 1 200 mm every year.

Kibbutz Hatzerim is one of the largest jojoba production sites in Israel. Jojoba oil was originally produced as an industrial lubricant. However, it soon became popular with the cosmetics industry due to its anti-inflammatory properties. The production of jojoba in the deserts of Israel is unique. Due to the mechanical harvesting procedures, the top soil in the tree row and work row is compacted. This is permissible since the rainfall is extremely low and the trees are irrigated by means of subsurface drip (Photo 4 and 5). This particular jojoba plantation is irrigated with recycled municipal wastewater from the nearby city. Wastewater is often rich in minerals, such as nitrogen, potassium, chlorine and sodium. As for many of the sites visited, the crop is sufficiently supplied of nitrogen from the irrigation water without additional fertilisers. The subsurface drip also reduces the risk of damage caused by wild animals in the area.

PHOTO 5. Jojoba plantation that is irrigated by means of subsurface drip.

Israel’s agriculture is dynamic and strongly supported by their government, as well as their private sector. Although many challenges exist, agronomical decisions are based on the specific growing conditions at the time. These decisions are often backed by research carried out by specialists in the field. There are many unused water sources in South Africa, which can become increasingly important as the demand for fresh water increases. Although there are many difficulties when using unconventional water sources for irrigation, sustainable use can be achieved with proper guidelines.

SATI and Winetech for funding my tour. Drs Carolyn Howell and Philip Myburgh for initiating my participation of the tour. ARC Infruitec-Nietvoorbij for allowing me the opportunity to gain overseas experience.

* This article was published in the November 2018 edition of the SATI Technical Bulletin.