The 2019 Pinotage Association AGM convened at Neethlingshof on 12 June, where invited speakers addressed guests and members of the Association.

Johan Schwartz, the Pinotage Association’s marketing manager, underlined Pinotage’s disproportional contribution as a relatively young cultivar to Brand SA and the South African wine industry, building on the Association’s three pillars of research, knowledge transfer and marketing. The Assocation’s vision for 2025 focuses on the premiumisation of the brand, with plans to double its contribution to the South African economy through strategies such as destination marketing.

SAWIS figures show the biggest market for Pinotage is the UK, which showed 90% growth in eight years, while emerging markets China, Russia and the US present new opportunities but also new responsibilities.

This year’s rebranding, which features a new font and cleaner logos, tied in with Absa’s corporate rebranding, visually aligning the Association closely with its official sponsor. A new, streamlined website will improve the online experience and pave the way for future developments on the digital front.

The Association will engage in further marketing initiatives to strengthen ties with wine industry entities and increase collaboration with related stakeholders. Cape blends will also enjoy more exposure in future. A minimum requirement of a 30% Pinotage component is being instituted to ensure a strong varietal focus.

The word ‘old’ is a subjective descriptor (or a “characteristic”) and standardised certification such as the Old Vine Project seal allows this characteristic to become a recognisable attribute within an accepted category.

The study found for every year a vine was kept in the ground, it added R3.64 to the wine’s value. Pinotage showed even greater gains as it’s become emblematic of South Africa, and consumers seem to place a premium on this symbolic value. According to Jonathan, Pinotage succeeds in communicating heritage and authenticity, with the Stellenbosch region being part of this mix.

NWU political analyst Theo Venter surveyed the political landscape in the wake of the 2019 election. He sees the smaller cabinet as a positive development but thinks the benefits are offset by more deputy ministers. According to Theo, farmers and agriculture will help the economy out of its current state.

Crime is a symptom of poor economic growth and high unemployment, which the WEF has identified as a major economic risk along with water resources and poor national governance. The failure of critical infrastructure such as road and rail is a further obstacle to overcoming the economic downturn.

South Africans have to adapt and become used to living in a VUCA environment – characterised by high volatility, uncertainty, complexity and ambiguity. Theo says economic growth is tied to South Africa’s changing political landscape. South Africa’s economic growth decoupled from the global trend during the Zuma years and recovering from this break is the biggest challenge of Ramaphosa’s term.

The current debate about the Reserve Bank’s mandate has been politicised, Theo says. It is little more than a symptom of the political rift inside the ANC which South Africa can ill afford at this time. The question is whether Ramaphosa’s “long game” can turn a vicious cycle into a virtuous one. 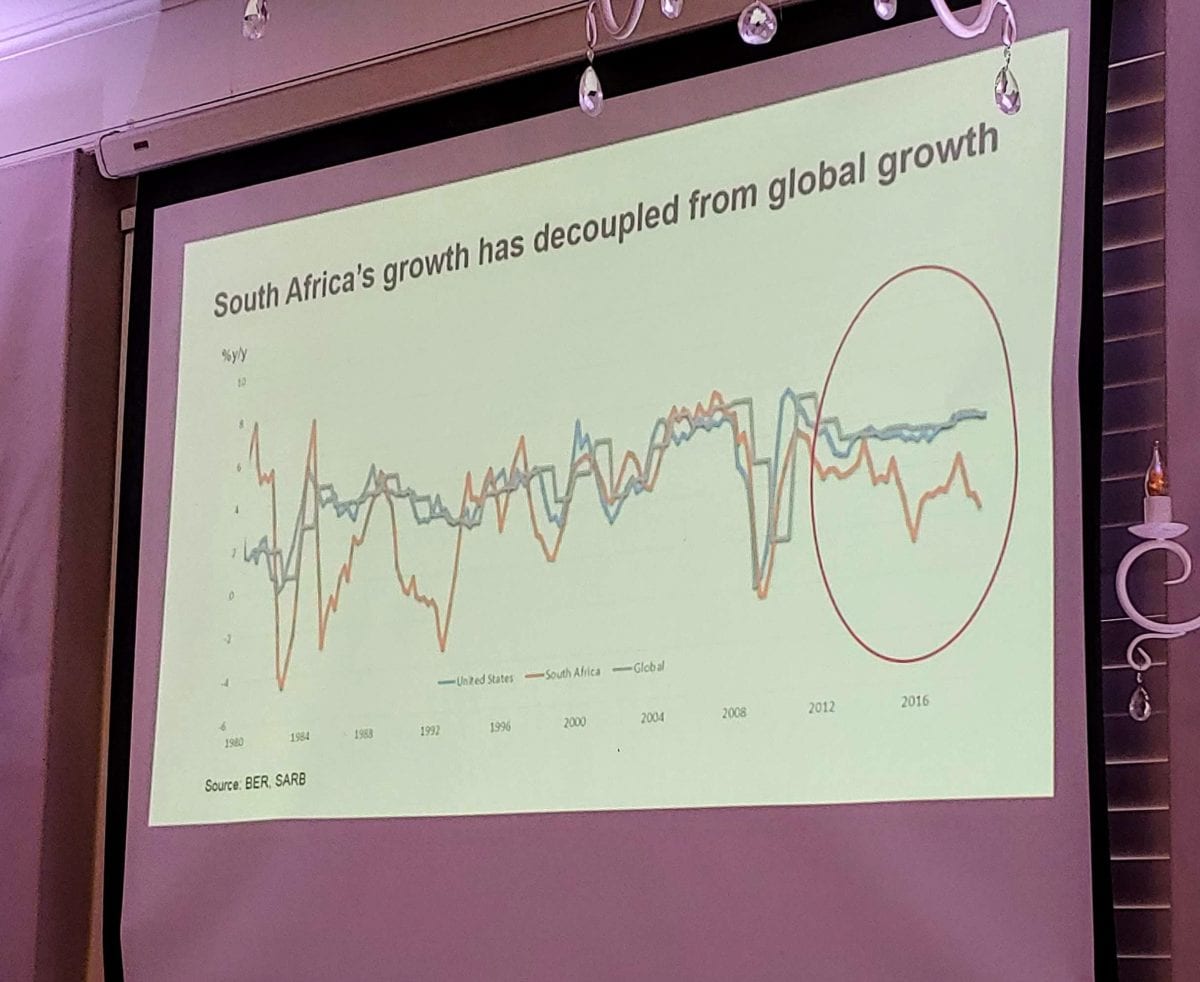 Unfortunately a mismatch between the ANC presidency and state presidency terms means Ramaphosa effectively only has five or six years before he loses the power to make a difference. The president has to act decisively to improve the economic outlook and provide policy stability. The next year will be an indication of where South Africa is heading.

According to Theo, any changes to the constitution will only be cosmetic and there have been promising signs that indicate land will retain its value.

Although Brexit adds salt in the wounds of our local uncertainty, Theo believes it presents an opportunity for the wine industry. The industry’s real challenge is getting a firm commitment from government to improve security, and it should take hands with Premier Alan Winde to achieve this.

Theo sees opportunities for the Western Cape, particularly through tourism. His final advice to wine farmers: don’t plant Citrus; it uses more water than vineyards. Stay with what you do well!