Using MLF to create a buttery wine or not 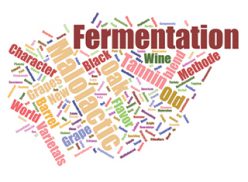 Malolactic fermentation (MLF) is a secondary fermentation carried out by lactic acid bacteria (LAB). This process can occur spontaneously or can be induced by using MLF starter cultures. Currently, the commercially available MLF starter cultures belong to the species Oenococcus oeni and Lactobacillus plantarum. The use of starter cultures to induce MLF is preferred to avoid the risks associated with spontaneous MLF. The starter cultures can be inoculated simultaneously with the yeast, known as co-inoculation, or after the completion of alcoholic fermentation, known as sequential inoculation. MLF is a desirable process as the decarboxylation of l-malic acid to l-lactic acid and carbon dioxide decreases the acidity and increases the microbial stability of wine. This process also influences the organoleptic properties of wine.

In addition to malic acid, some MLF starter cultures can also degrade citric acid usually present in grape must at concentrations of 0.031 g/ℓ to 0.42 g/ℓ. The metabolism of citric acid leads to the production of acetate, d-lactate, diacetyl, acetoin and 2,3-butanediol (Figure 1). The production of acetate is one of the reasons for the 0.1 g/ℓ to 0.3 g/ℓ volatile acidity increase during MLF as citric acid metabolism is linked to malic acid degradation. 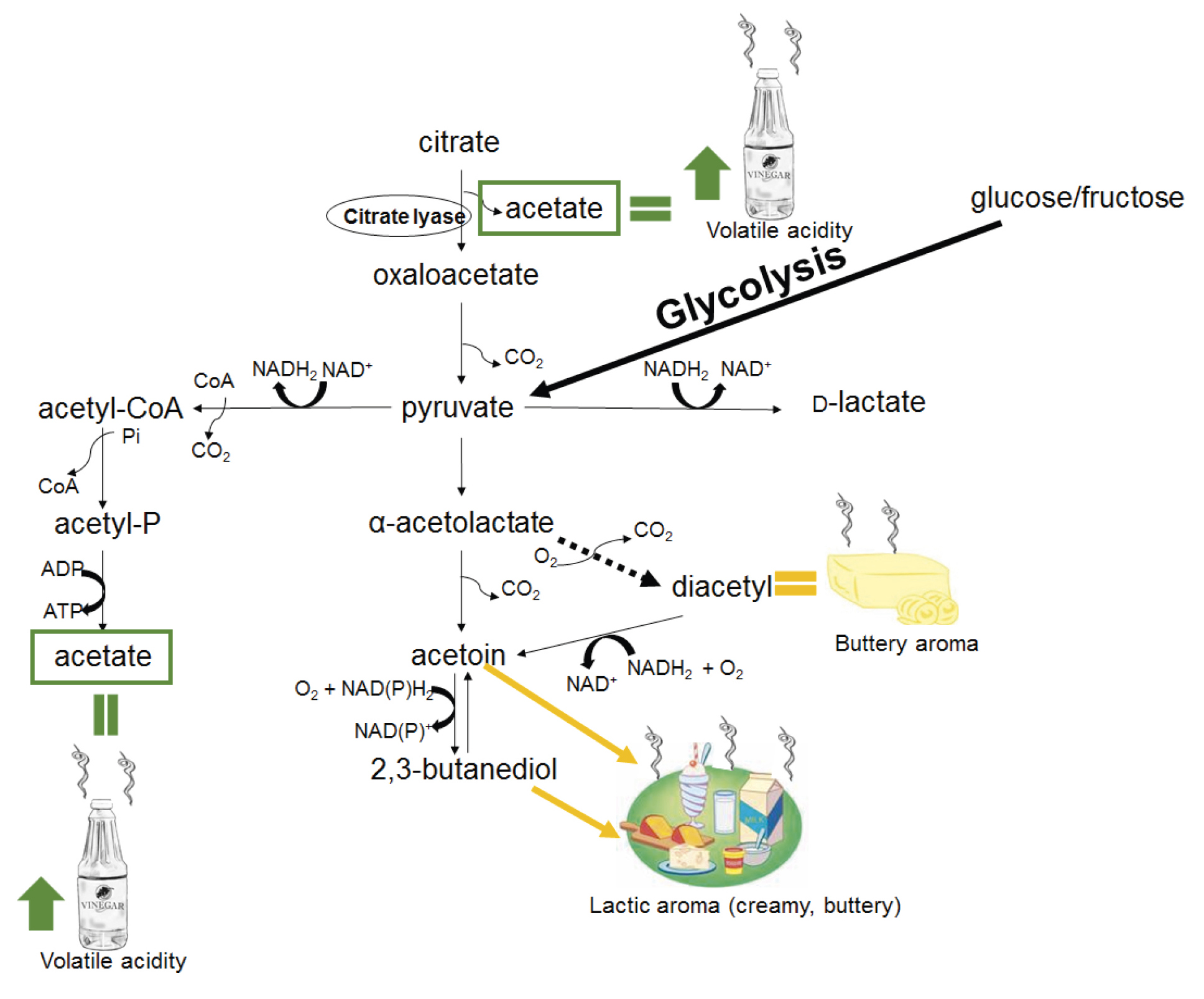 When present at low concentrations, diacetyl can contribute to the complexity of wine. Diacetyl has a buttery aroma which contributes to wine complexity when present at concentrations above its sensory threshold value of 0.2 mg/ℓ to 2.8 mg/ℓ. However, high diacetyl concentrations above 5 mg/ℓ can give rise to an overwhelming buttery aroma that masks the fruity and/or vegetative aromas in wines. Diacetyl can be reduced to the less sensory active acetoin and 2,3-butanediol (Figure 1) with much higher sensory thresholds of 150 mg/ℓ and 600 mg/ℓ, respectively. The reduction of diacetyl to these compounds is therefore encouraged during winemaking if a buttery style wine is not wanted. Several factors influence this reduction, as well as the sensory perception of diacetyl in wines.

A few of these factors include:

Composition of grape must

Grape must with a higher citric acid concentration leads to increasing concentrations of acetate, d-lactate, diacetyl, acetoin and 2,3-butanediol. Excess acetate and d-lactate causes over acidification and inhibits bacterial growth thus prolonging MLF. A longer MLF duration can result in more diacetyl being produced during the fermentation.

Several studies have previously indicated that diacetyl in white wines was less stable and more likely to be reduced to acetoin and 2,3-butanediol than in red wines. However, the buttery aroma of diacetyl is more likely to occur in white wines than in red wines, due to the presence of phenolic compounds such as p-coumaric, caffeic, ferulic, gallic and protocatechuic acid. These phenolic compounds lower the buttery aroma in red wines by binding to diacetyl.

After analysing the grape composition, the next factor to consider is the type of starter culture used to induce MLF. MLF starter cultures vary greatly from one another regarding their ability to degrade citric acid. Some starter cultures, such as Viniflora® CiNe™ from Chr Hansen, are citrate negative and are unable to degrade citric acid. These strains usually lack the citrate transporter and/or the citrate lyase that cleaves citric acid to oxaloacetate and acetate (Figure 1). However, these strains might still produce diacetyl from pyruvate formed during the fermentation of sugars, but to a lesser extent (Figure 1).

Once a starter culture has been selected the inoculation scenario and inoculation dosage must be considered. Several studies described co-inoculation wines as being fruitier than sequential inoculated wines. This is due to the reduction of diacetyl to acetoin and/or 2,3-butanediol (Figure 1) that is stimulated by high glucose concentrations. This diacetyl reduction is carried out by both the MLF and yeast starter cultures.

The yeast lees present during sequential inoculation can also influence the diacetyl content in wine. The yeast lees are able to reduce diacetyl to the less sensory active acetoin and 2,3-butanediol during MLF. Longer contact with the yeast lees will lower the amount of diacetyl. Ageing wine on yeast lees is therefore recommended when creating a fruity or vegetative driven wine style.

Moreover the inoculation dosage and duration of MLF also influence the amount of diacetyl produced. A lower inoculation dosage of MLF starter cultures will result in a sluggish or longer MLF. These bacteria usually struggle during the fermentation and degrade more citric acid to provide them with more energy. This usually results in higher diacetyl concentrations. An inoculation dosage of 104 CFU/mℓ favours the production of diacetyl as opposed to 106 CFU/mℓ. Thus wine that underwent spontaneous MLF could possibly have higher diacetyl concentrations than wines where MLF was induced.

Fermentation temperature influences the diacetyl content in wine by affecting the bacterial growth and therefore duration of MLF. Most wine MLF starter cultures have an optimum temperature of 20°C to 25°C. At lower fermentation temperatures, the starter cultures struggle and the duration of MLF increases. As mentioned previously, wines that had a longer MLF duration are usually associated with higher diacetyl concentrations. Furthermore, diacetyl is reduced faster to acetoin and 2,3-butanediol at higher temperatures.

Diacetyl is spontaneously produced during citric acid degradation from α-acetolactate (Figure 1) which is favoured in the presence of oxygen. The degree of aeration during winemaking is important since diacetyl in semi-aerobic conditions can be almost six times higher than in anaerobic conditions.

The stabilisation of wine with sulphur dioxide (SO2) decreases the diacetyl concentration and must be considered during winemaking. Initial addition of SO2 after completion of MLF binds to diacetyl which then becomes sensory inactive. This reaction is reversible and as the presence of active SO2 decreases, unbound sensory active diacetyl is once again produced. The reaction between SO2 and diacetyl is influenced by various other factors such as pH, aeration and the presence of other compounds that can bind to active SO2. These factors may influence the diacetyl content in wine during storage. Some studies have observed that diacetyl content in aged red wine either stays the same or decreases.

Another important factor to consider during winemaking is the time of stabilisation with SO2. When wine is stabilised with SO2 upon completion of MLF, but citric acid has not been completely degraded, it can result in higher diacetyl concentrations. This increased diacetyl concentrations may occur, since the starter cultures might not have time to reduce diacetyl to acetoin and/or 2,3-butanediol. Thus stabilisation of wines after the completion of both MLF and citric acid degradation is proposed if a buttery style is not wanted.

The degradation of citric acid by MLF starter cultures can influence wine aroma and is therefore important to consider during winemaking. The buttery aroma from diacetyl produced during citric acid degradation can be managed by certain procedures to create a buttery wine style. The MLF starter culture, inoculation dosage and timing of inoculation are the most important factors to be considered for making a buttery style wine.

Oenococcus oeni and Lactobacillus plantarum are the commercial MLF starter cultures that can influence the organoleptic properties of wine by metabolising grape compounds such as citric acid. Important flavour compounds such as diacetyl, acetoin and 2,3-butanediol are produced during the degradation of citric acid. Of these compounds, diacetyl result in a buttery flavour that can mask the fruity and/or vegetative aromas in wine. However, during fermentation diacetyl can be reduced to the less sensory active acetoin and/or 2,3-butanediol. This reduction, as well as the amount of diacetyl, acetoin and 2,3-butanediol produced, is influenced by various factors. This article summarises some of these factors such as the grape must composition, MLF starter culture, inoculation scenario and dosage, fermentation temperature, aeration and addition of sulphur dioxide.