Three wine industry legends recently regaled an audience in a unique event recently hosted by the Institute of Cape Wine Masters at Guardian Peak in Stellenbosch. And the trio of icons, namely Danie de Wet, Duimpie Bayly and Jan Boland Coetzee, certainly proved to warrant the title of their appearance which occurred under the banner of Three Wise Wine Men. 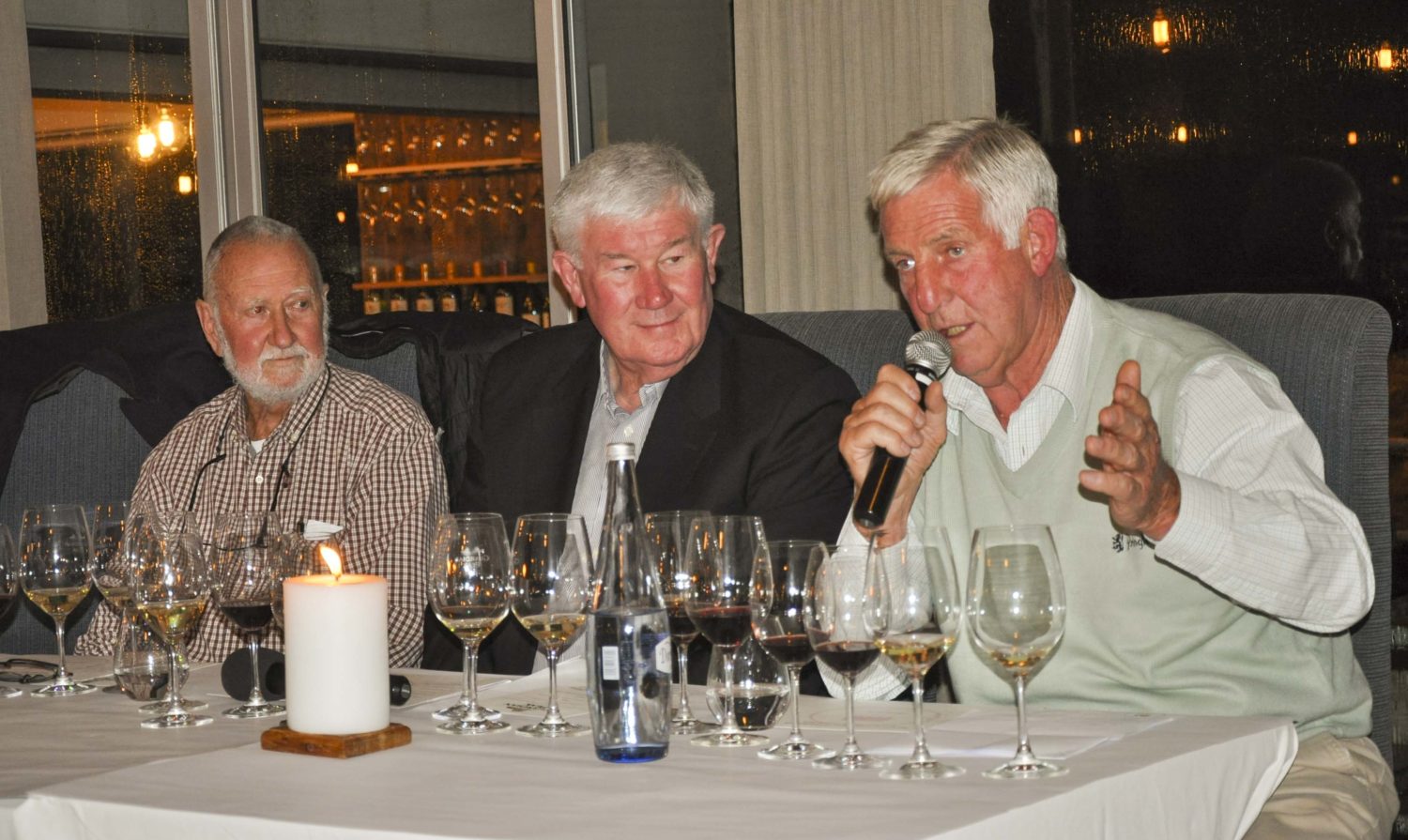 Danie, proprietor of De Wetshof who played a profound role in establishing Chardonnay in South Africa, brings everything back to the region and the site. “When I returned to De Wetshof from Geisenheim in Germany in the 1970s, where I studied at their famous wine institute, I realised South Africa was lagging behind in terms of grape varietal diversity,” said Danie. “If we were not going to get our hands on the right plant material, we’d never be competitive in global markets – the Cape winelands was predominantly planted to Chenin, Palomino, Colombard and Muscat varieties. To increase our footprint we were going to need consumer-driven varieties such as Sauvignon Blanc, Chardonnay and Rhine Riesling, and I and a few young guns set about convincing the authorities to establish these.” 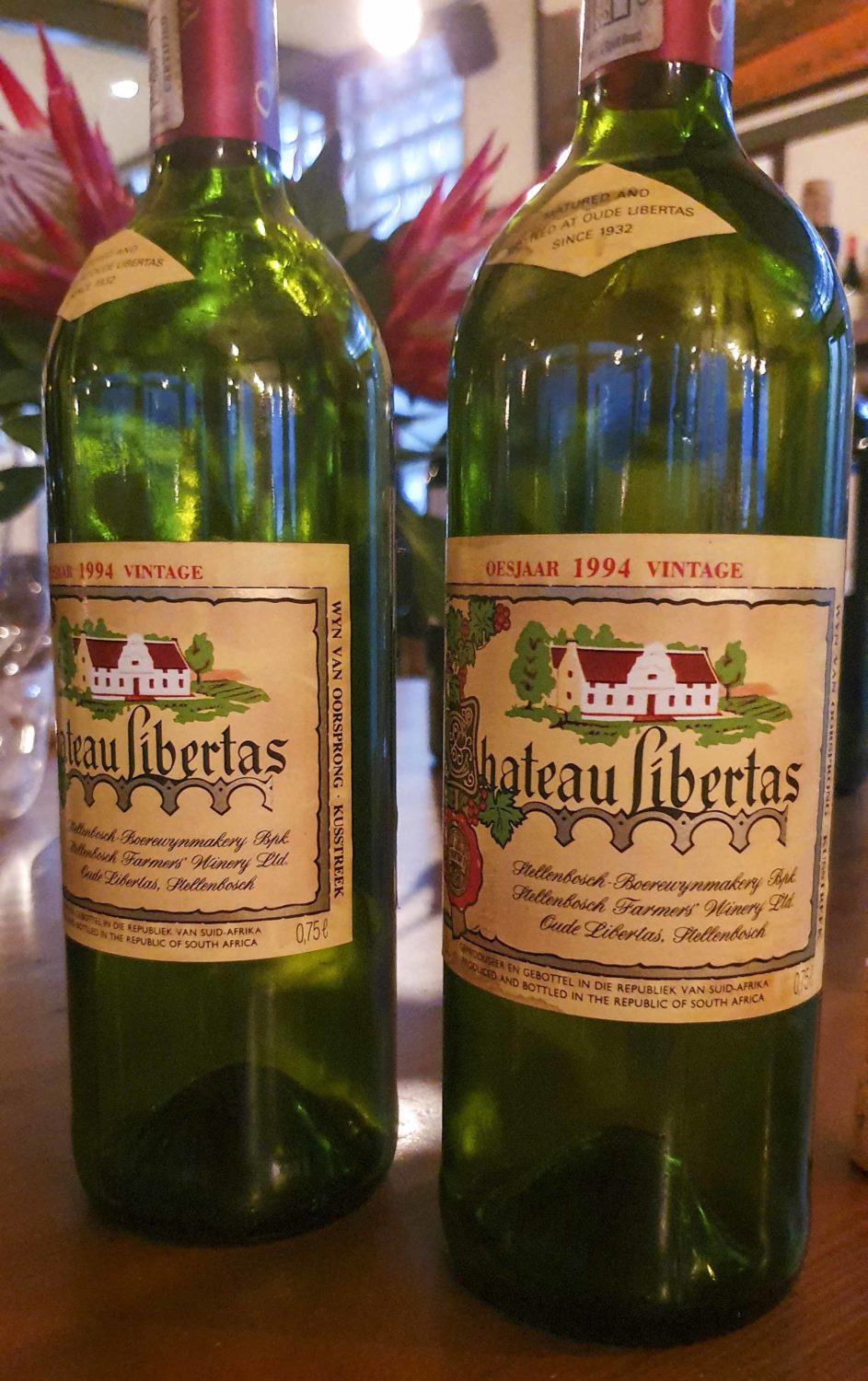 Duimpie’s 1994 Chateau Libertas was up for taste!

Danie reminded the audience that up until 1955 most of the wine being consumed in South Africa was fortified sweet wine. “It was only with the advent of cold fermentation that we were able to offer fresh, fruity white wines, and this changed the consumer landscape – Lieberstein, for example, was one of the biggest selling brands in the world at 29m litres.”

Looking back, Danie stated that a career highlights was being one of the role-players who established the Wine of Origin system which was legislated in 1973. “Today I can say that South Africa’s Wine of Origin System is the best system of its kind in the world, and having been part of it was a great honour.”

As Head of Production at Stellenbosch Farmers Winery, Duimpie oversaw some of the country’s legendary wine brands. One of these, Chateau Libertas, was poured for guests attending the event – a wine from the 1994 vintage.

“This was one of the Cape’s great brands,” recalls Duimpie, “and was served to King George VI and the Royal Family when they visited South Africa in 1947. As you can see by tasting the 1994, it is holding up very well for a wine of 25 years of age.”

Duimpie said one of the highlights of his career was being involved with introducing the first commercial bottling of Pinotage, the Lanzerac 1959, to the wine world.

“We had been toying with the idea of bottling Pinotage for some time, as the vineyards around Stellenbosch were producing some excellent wines, but were not sure whether they would find a place in the market under the ‘Pinotage’ label. But when I tasted the 1959 vintage with Ronnie Melck, also from Stellenbosch Farmers Winery, we realised this wine was of such great quality it was time to go public. And seeing SFW owned the Lanzerac brand, we went for it – the rest is history.

Duimpie said he is extremely optimistic about the future of the South African wine industry. “The industry is in good hands, and it is improving all the time,” he said. “We are really getting to know the vineyard sites around the Cape. Planting the right grapes in the right places. And there are lots of talented winemakers around. The future is great.”

Jan Boland began his career auspiciously: as winemaker at the famous Stellenbosch estate Kanonkop, at a time during which he also played for the Springbok rugby team. “We made the first Kanonkop estate wine in 1973, but one must remember that at that time Kanonkop harvested more Clairette Blanche than any other variety,” he said. 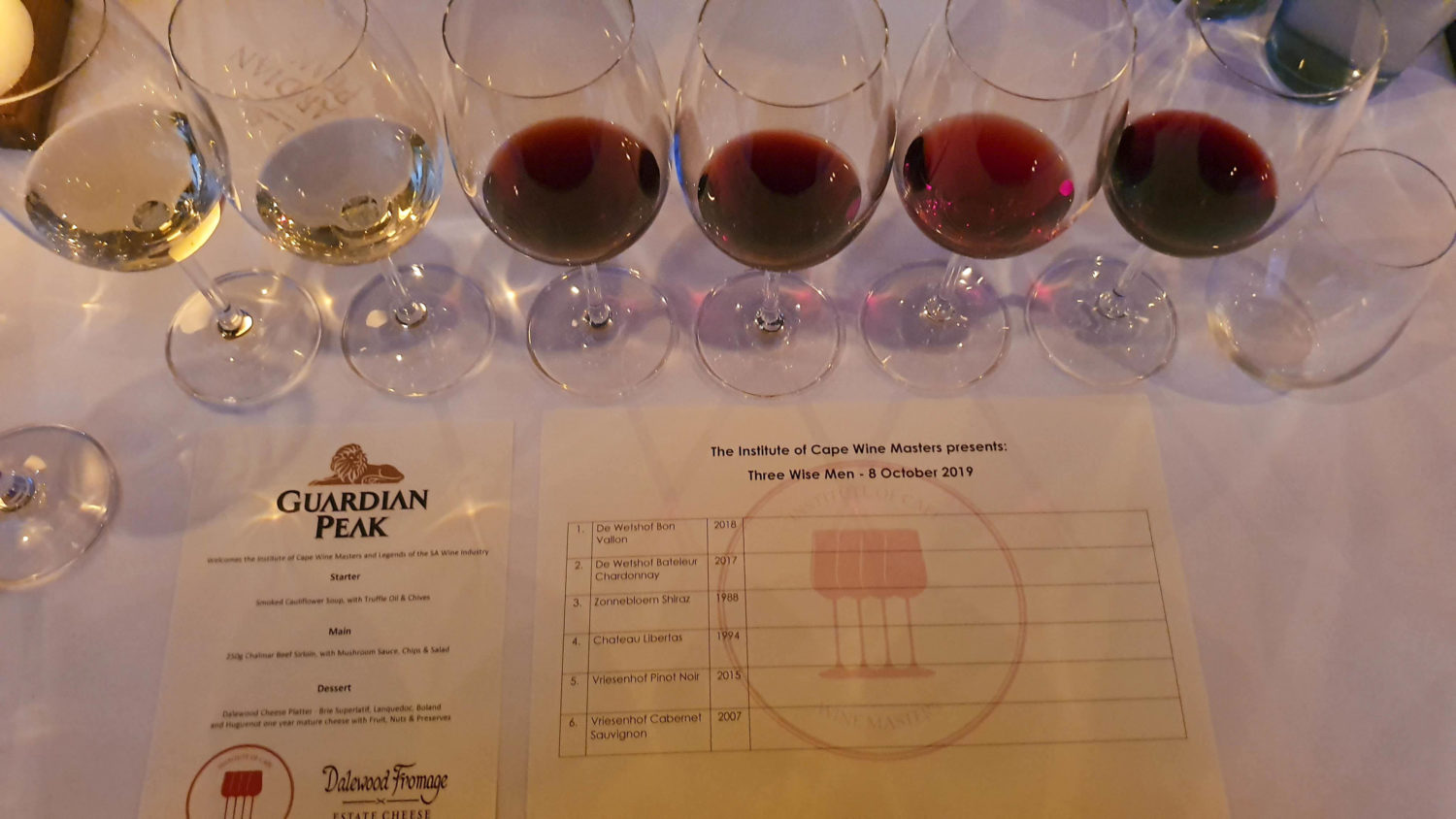 He left Kanonkop in 1980 to experience Burgundy, for whose wines he had developed a love that continues until this day. (Guests were treated to Jan’s Vriesenhof Pinot Noir 2015)

“What can I say about Pinot Noir?” he asked. “It is magic, expressing terroir and nature in an incomparable way. Shakespeare wrote about it. Winston Churchill and Napoleon were fascinated by Pinot Noir. It is a quest, discovering something new about Pinot Noir each day, each year.”

A great Pinot Noir, he says, captures a place. “Trans-location is not possible.”

Of his experience in the Joseph Drouhin winery in Beaune, Burgundy, Jan remembers that when the French saw how keen he was to work, they let him do just about everything. “I’d carry all 300 tons of grapes into the cellar, and lug out the pressed skins too!”

It was in France, though, that Jan saw the influence of nature on plants, something that fascinates him to this day. “I visited the garden of Claude Monet at Giverny during a rugby tour to France, and what I saw was mesmerising: the plants and flowers had taken on different hues, colour mutations purely from the effect of the natural cycles over time. It has stuck with me to this day.”

Like all legendary evenings, this was one you’d wish could never end.