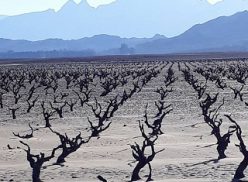 Water is intrinsic to economic growth and prosperity and crucial for wine grape producers to grow their vineyards, continue operations and prepare their products.

The current drought and predicted long-term drying trends in the Western Cape have serious implications for the wine industry. But despite the drought, the 2017 harvest resulted in a 1.4% bigger crop than the previous year, with healthy grapes, intense flavours and colours holding the promise of great wines.

The dry, windy conditions resulted in healthy vines that needed less chemicals to keep pests and diseases at bay. Vineyard growth was not too vigorous, which decreased labour inputs. Due to the harvest remaining on par with 2016 and a projected increase in demand, stock levels are expected to be the lowest in five years at the end of 2017.

Most of our fresh water comes from rain collected in catchment areas high in the mountains surrounding our cities. Other sources include groundwater as base flow and return flows from various water uses and collected in dams and reservoirs. In South Africa, about 40% of our water is lost due to inefficient use of water supply.
Studies done by the department of water and sanitation (DWA) show that most of South Africa’s water is used for agriculture, with over 60% of all available water going into the sector for irrigation. With 95 775 ha in the Western Cape under wine grapes we, as an agriculture community, need new ways of thinking about water without compromising economic development. Measures such as a cut in quotas, the drilling of boreholes, the installation of grey water systems and using water tanks to harvest rainwater simply aren’t enough.

It’s not only the lack of irrigation water that has an impact on the vines, but also the variance between minimum and maximum day and night temperatures.  Vineyards, like fruit trees, need cold units to build reserves and with the current fairly warm daily temperatures this has not happened sufficiently.

The drought has until now not had a major impact on vines, but adequate rainfall is needed this winter for good vine performance and crop yields for the coming season. Next season’s potential harvest is dependent on various factors such as the size of the current year’s crop, post-harvest irrigation, reserve levels built during winter and the season leading up to the next harvest.  The looming risk of veld fires damaging vineyards in the Cape winelands is also greater during dry conditions.

It’s important to note that any strain on vineyards during pre-season and a lack of reserves can lead to smaller berry size which can be great for quality, but lead to lower yields which can negatively impact producers’ income stream and viability. In the short term producers need to carefully manage water loss as a result of leaking dams and pipes. Producers also need to focus on irrigation technology and techniques.

The starting point for any well-executed irrigation scheduling system is reliable soil moisture measurement. The past two dry seasons clearly showed good soil moisture monitoring combined with good decision-making resulted in water being conserved. The level of soil moisture is another important factor for vineyards and is vital for the preparation of land and to plant new vineyards during spring. The planting of cover crops also assures good water absorption and better water retention when the rainy season starts.

In the majority of cases producers realised they could maintain vegetative growth and crop loads even with decreased water supplies. Some producers also reported that lower water regimes possibly resulted in higher shoot fertility rates because of lower vigour conditions, which led to higher yields.

It is, however, important to note that certain areas are more affected by irrigation than others. The wine grapes of the Orange River Cellars, which originate from about 800 producers situated along the Orange River and deliver about eight to 10% of the annual South African wine grape harvest, were not affected by the drought in the Western Cape and received enough water due to rain in the northern parts of the country

In the longer term producers will have to look at quality, drought-resistant vines which produce more flavour, acidity and intensity, but have lower water needs. These include new clones of Grenache and cultivars such as Assyrtiko, Verdelho, Chenin Blanc, Vermentino, Aglianico, Cabernet Sauvignon and Touriga Nacional, which are suited for South Africa’s growing conditions and changing climate. Currently the industry is aligning its research activities to address the above objectives.

Other solutions include continuous evaluation of the financial viability of various vineyard blocks, given the availability of water and climatic conditions. This can necessitate the uprooting of unproductive vineyards and replacing them with new clones and cultivars that are better suited to our conditions.

Infrastructure maintenance of our major dams and canals that supply water to the main agriculture regions is also of the utmost importance. The expansion of the dam and canal infrastructure in the Olifants River area and the Clanwilliam Dam and Brandvlei Dam scheme in Worcester is equally important. Planning with various government departments is at an advanced stage to increase the capacity of the canal system to supply water to an additional 4 000 ha earmarked for Black Economic Empowerment. The Berg River-Voëlvlei Augmentation Scheme, which will allow for the diversion of surplus winter water into the Voëlvlei Dam, must be accelerated.

VinPro representatives are part of the Western Cape department of agriculture task team for the expansion of the Brandvlei and Clanwilliam dams. A key part of these developments is the opportunity created for Black Economic Empowerment, including land reform. Current discussions focus on criteria to be used to fast-track the transfer of ownership to new projects.