Sugars on the move through the vine 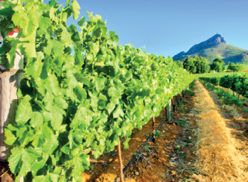 How often does a producer think of a leaf, or berry, or any of the grapevine organs in terms of their main plant biological functions? Probably not that often; we tend to think of those organs from the perspective of the production of the raw materials (grapes) for wine-making. Ultimately, from a plant biology point of view, berries are made to ensure the next generation (the embryos in the seeds) and the ripening berry is actually just “advertising” those seeds for dispersal by becoming juicy, sweet and fragrant – the rest of the organs are (just) there to ensure that reproductive growth is successful. This (biological) fact is well illustrated when following the production and movement of sugars in the different plant organs, as was done in an experiment where bunches were isolated from sugar supply with shoot girdling.

Sugars are produced in all plants through the process of photosynthesis and are then moved throughout the plant body to allow growth, development, stress protection, as well as the accumulation of storage compounds. Not all plant organs photosynthesise; those that do are called “source organs”, while the organs that are the net receivers of the products of photosynthesis are called “sinks”. A plant’s organs are therefore in an energy relationship, often called the source-sink relationship. Plants control this rather fluid relationship intrinsically in various ways, but it is complex and not everything is understood.

Sinks and sources of the grapevine

The mature leaves are the main source organs in the grapevine, although green berries contribute roughly 20% of their own sugars until the onset of ripening.1,2

The shoots (including young leaves, petioles and shoot tips), woody trunks, roots and berries are sink organs and the strength of the different sinks (i.e. the amount of sugars required of a specific sink at a specific developmental stage) change throughout the season (Figure 1). 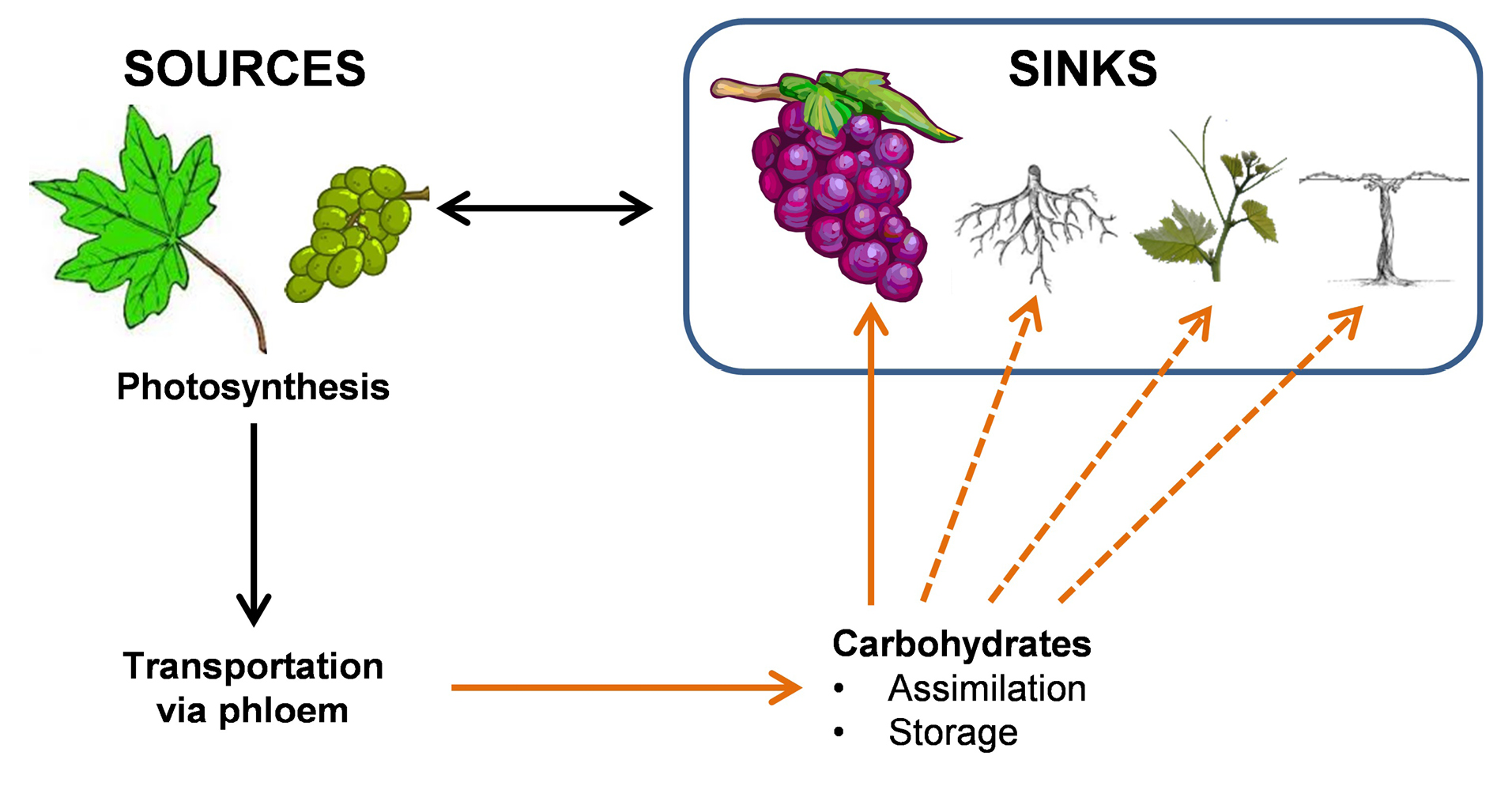 FIGURE 1. This scheme illustrates the relationship between the source and sink organs during the ripening period. During this time the main sink organ is the fruit, but other organs including the roots, stem and leaves also act as sinks.

From budburst to berry set carbohydrates and other reserves are moved from the stored reserves in the roots and the permanent woody structures to the new shoot tips, thereby supporting their development. Young leaves utilise these sugars for growth and metabolism (as sink organs) until they reach approximately a third of their final size, when they would become net exporters and thus source organs.4

During this period, the shoot tip is one of the strongest sink organs, with most of the produced sugars being allocated for their growth and development. Ultimately the young flowers become an additional sink, albeit initially weaker than the growing point. Their strength, however, increases as fruit set is approached and as the berries grow.5 In the ripening phase, the majority of sugars are translocated to the grape berries; however, if shoot growth has not stopped at this point, the growing shoot tip will compete with the berries for these resources.

Various viticultural practices are used to ensure a balance is maintained between the source and sink organs during berry development and are carried out at different stages of development. Practices such as suckering and shoot thinning will occur in the earlier stages of development, between budburst and véraison, whereas, tipping and topping of shoots is usually done later. Management strategies can therefore influence to which organs sugar resources will be allocated; the more we know about this process the better we could plan, time and execute these practices to ensure optimal fruit ripening and vine health.

The ripening stage of a grape berry is accompanied by a massive accumulation of soluble sugars into the vacuoles of the flesh cells, but how is this process influenced when a bunch on a shoot is disconnected from its source? It stands to reason that the isolated bunch would show no or very little sugar import.

What will happen to the other bunches on the same shoot? Would they receive more sugar since the source to sink ratio is increased by disconnecting one of the bunches from the phloem tissue?

To better understand the interaction between source and sink tissues at this stage, a trial was conducted on Cabernet Sauvignon in the ripening period. Shoot girdling was used to temporarily disrupt the flow of sugars between sink and source organs. Girdling was done at the onset of ripening to interrupt the phloem connection on the primary shoot by removing a ring of bark and phloem tissue from around the shoot, above and below the bunch, thereby isolating the bunch from any sugar import (Figure 2). The leaf opposite to the girdled bunch was also removed in order to prevent any potential sugar input into the bunch from this leaf. 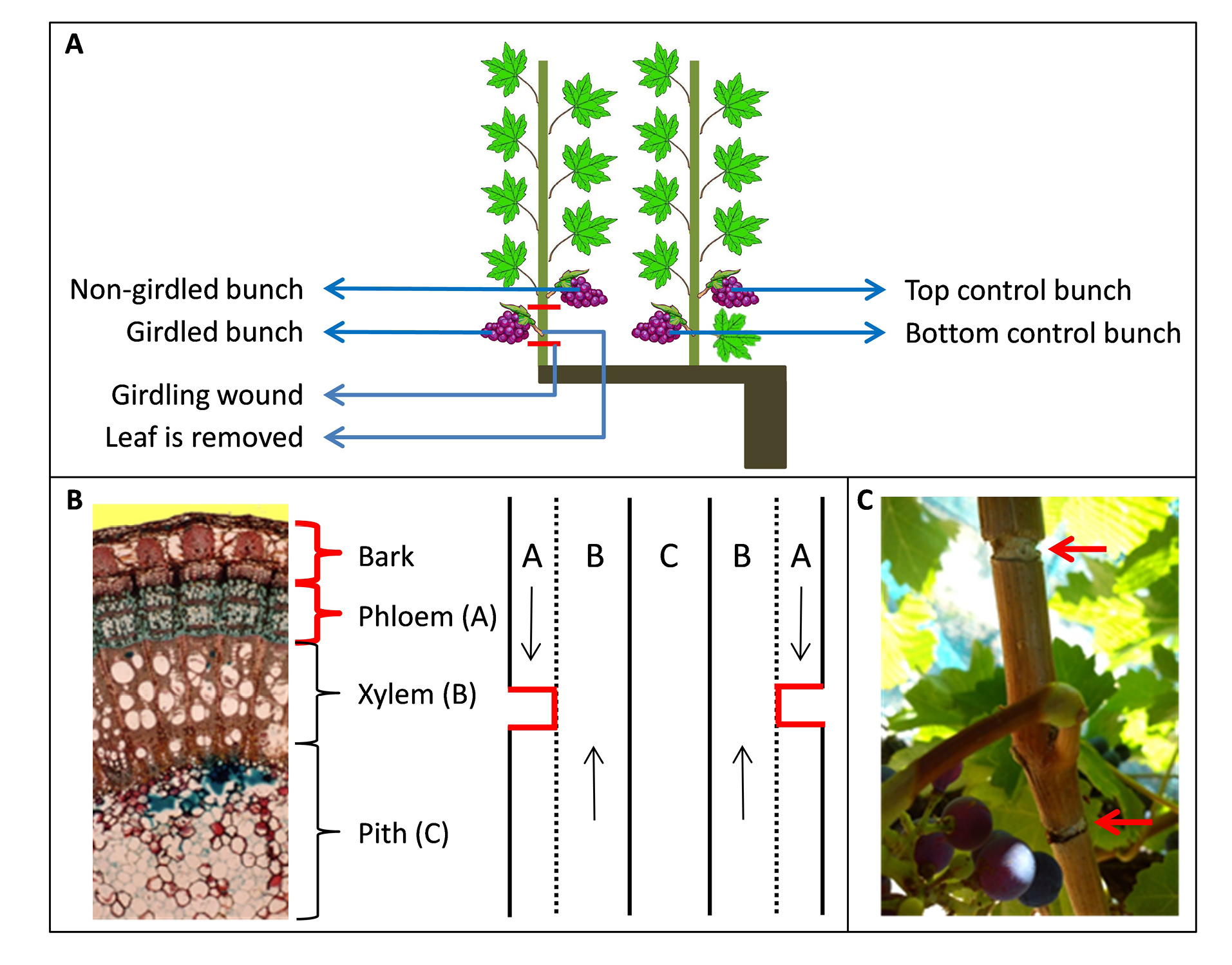 FIGURE 2. (A) A ring of bark and the phloem tissue was removed above and below the bottom bunch of a single shoot, thereby isolating it from carbohydrate import. The opposite leaf was also removed. (B) The phloem was separated from the xylem at the cambium level. (C) The girdling wounds after the treatment was applied.

Both the girdled and non-girdled bunches were analysed, as well as two non-girdled bunches from the same vine, but on a separate shoot (called control bunches, Figure 2). Berry classification was first done according to size (diameter), thereby allowing the subsequent comparative analyses to be conducted on berries of the same volume.

The results showed that berries from the girdled bunches had a lower sugar content when compared to berries of the same diameter class from the non-girdled and control bunches (Figure 3). This was expected since sugars are transported from the leaves to the berries via the phloem tissue, which was disrupted at véraison. The non-girdled bunches followed the same sugar accumulation trends as the two control bunches (Figure 3). This result was interesting since, although the number of sinks on that shoot was effectively reduced to only one bunch, the non-girdled bunches did not attract/receive more sugars. The removal/isolation of a sink from the source organs (leaves) on a primary shoot therefore does not necessarily result in the remaining sink organ loading more sugar, thereby implying the existence of a more integrated regulation mechanism between the source and sink organs which would control the sugar accumulation of the grape berries. 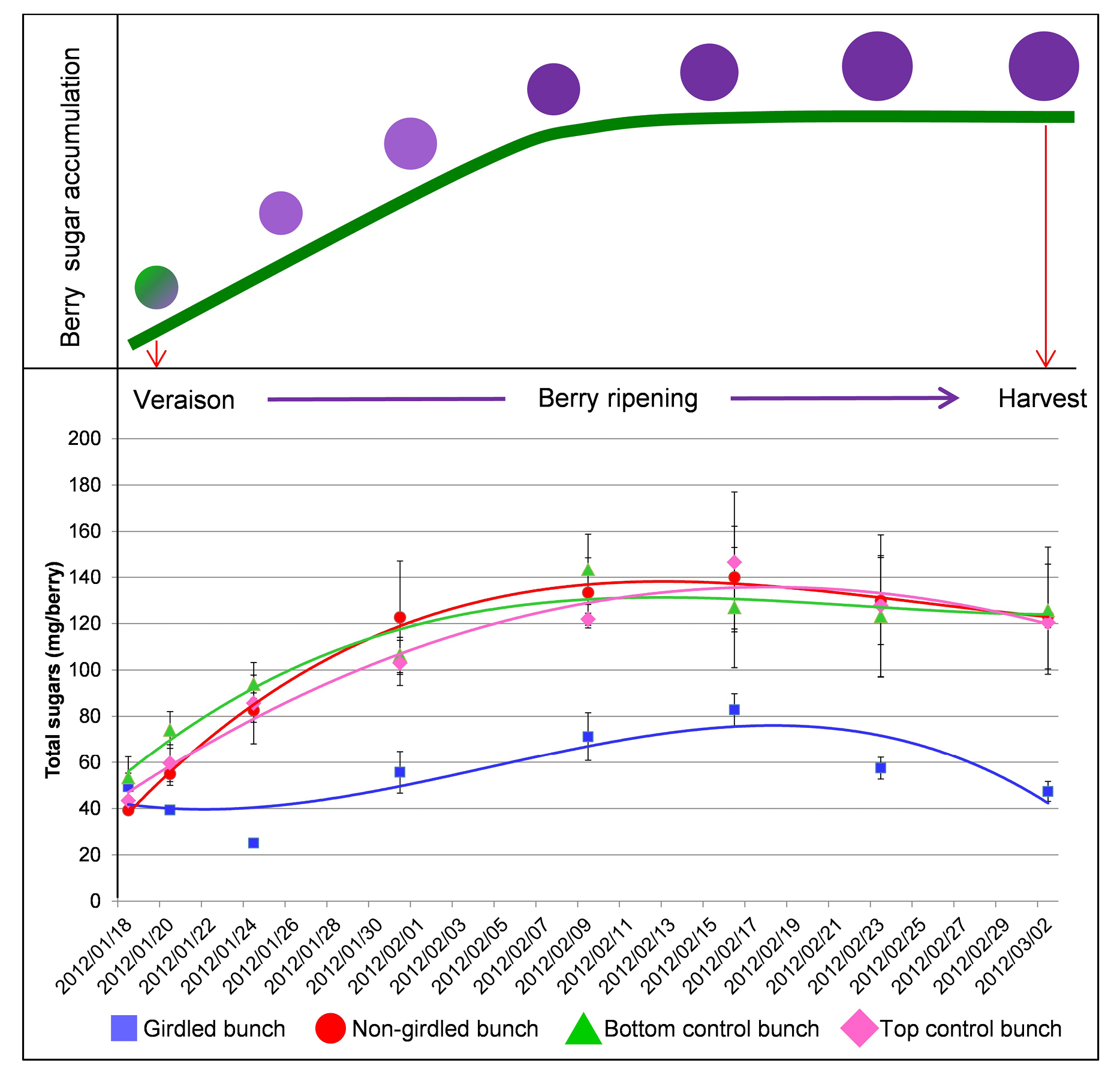 It is known that the implementation of viticultural practices will result in various outcomes and changes within the vine. This study and others have shown that there is a degree of co-ordination between the source and sink organs of the vine,3,8 i.e. changes in one will lead to a response in the other and understanding these responses will help make better management decisions. One study in particular proposed a phloem-based sink to source feedback mechanism, whereby a signal relayed between the leaves and grape berries was able to influence the rate of photosynthesis in the vine.7 It is clear that there is complex communication between the sink and source organs. Understanding these plant intrinsic control mechanisms will help to explain plant responses to management practices – ultimately such practices should be based and refined on the principle of “working with” and not “against” the inherent energy balance of grapevines.