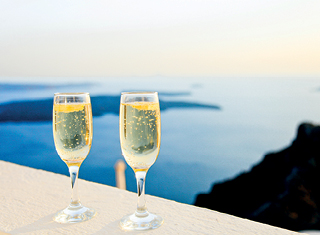 South African winemakers use many techniques to achieve their award-winning Méthode Cap Classique (MCC) wines. The science behind the sparkle has, however, been little explored.

MCCs have an interesting and unique matrix due to the ageing on lees and the dissolved CO2 which creates the iconic effervescence. Sensory evaluations are therefore very different from table wines. For this study, free-sorting was chosen as the method to evaluate MCC wines since it has been successfully implemented for sensory evaluation of other carbonated drinks, such as beer (Chollet et al., 2011), but has yet to be used in MCC evaluation. Generally, very little scientific literature is available on MCC. Based on the knowledge that temperature at various stages of winemaking affects the aroma and taste of wines, our study investigated the effect of grape temperature at pressing on sensory aspects of MCCs made through whole-bunch pressing and aged on lees for nine months.

For a review on the scientific literature currently available on this topic, see Part 1 (Sensory perception of traditional style sparkling wine) of this series.

In 2014 and 2015, Chardonnay and Pinot Noir grapes were harvested from Robertson and Darling, divided into four batches for storage at 0, 10, 25 and 30°C. Grapes were whole-bunch pressed at one bar and fermented at 14°C. Corresponding treatments were blended (50/50), liqueur de tirage added, and bottle-aged on the lees for nine months. The wines were riddled and disgorged at Simonsig cellar, Stellenbosch.

A panel of 30 experts assessed 12 wines in 2014 and nine in 2015 for each farm using the free-sorting method. The judges were asked to evaluate the wines firstly on aroma (first flight) and secondly on the taste (second flight) and group them according to similarities, giving each group a list of attributes to describe it. To minimise bubbles dissipation, the wines were poured five minutes before the tasting and presented coded and randomised, in dark glasses covered with a lid. Between flights the judges were asked to take a 15-minute break. The tasting was conducted over two days, one day for Robertson and another for Darling wines.

Figure 1 shows the 2014 Darling aroma sorting results which are similar to results for Robertson. The figure shows clear groupings of the wines according to temperature with good repeatability between biological repeats. Wines from chilled grapes (0 and 10°C) were described as ‘fruity’, ‘fresher’ and generally more aromatically appealing, similar to aroma attributes cited for other young (nine-months old) TSWs (Torrens et al., 2010). Warm grapes (25 and 30°C) produced MCCs described by judges as ‘toasty’, ‘oaky’, ‘buttery’ and ‘vanilla’, which were similar to those previously cited for 18-months and older TSWs. The higher temperature treatments also had aromas, such as ‘faulty’, ‘VA’ and ‘solvent-like’, which have previously been associated with oxidised white wines (De la Presa-Owens et al., 1998). 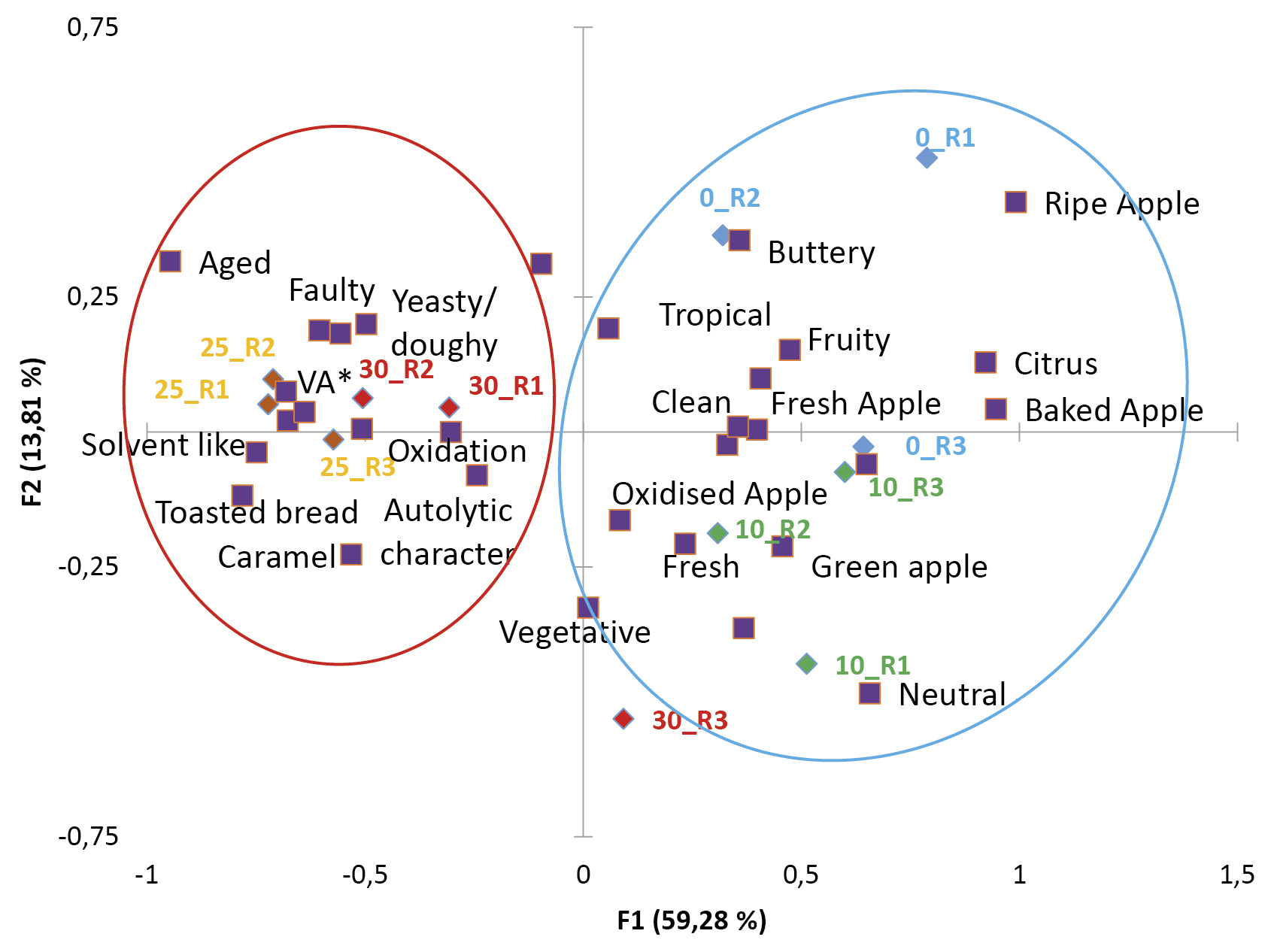 FIGURE 1. Correspondence analysis (CA) conducted on taste sorting results of MCCs made from grapes harvested from Darling in 2014 and stored at 0, 10, 25 and 30°C with three repeats per temperature. The ellipses are drawn according to the AHC analysis. VA – volatile acidity.

The 2014 sorting was on 12 wines and only nine were assessed in 2015. The 25°C treatments were removed from the 2015 sensory evaluation after being stuck in fermentation. The differences in the number of wines assessed at one time influences the statistics; different data set sizes for the two vintages may have influenced any distinctions between the treatments. The 2015 aroma sorting of the MCCs again showed groupings according to temperature (Figure 2) with good repeatability. Generally, positive aroma attributes were more frequently cited than negative attributes for all 2015 treatments compared to 2014.

The Darling 0°C and 10°C treatments were described by judges as ‘fruity’, ‘green’ and ‘baked apple’, similar to the 2014 vintage. In contrast to 2014, Robertson 0°C treatments were associated with ‘oxidised’ and ‘toasted bread’ notes and 10°C were perceived as having attributes similar to those associated with higher temperature treatments, such as ‘VA’, ‘vanilla’ and ‘caramel’ in 2014. 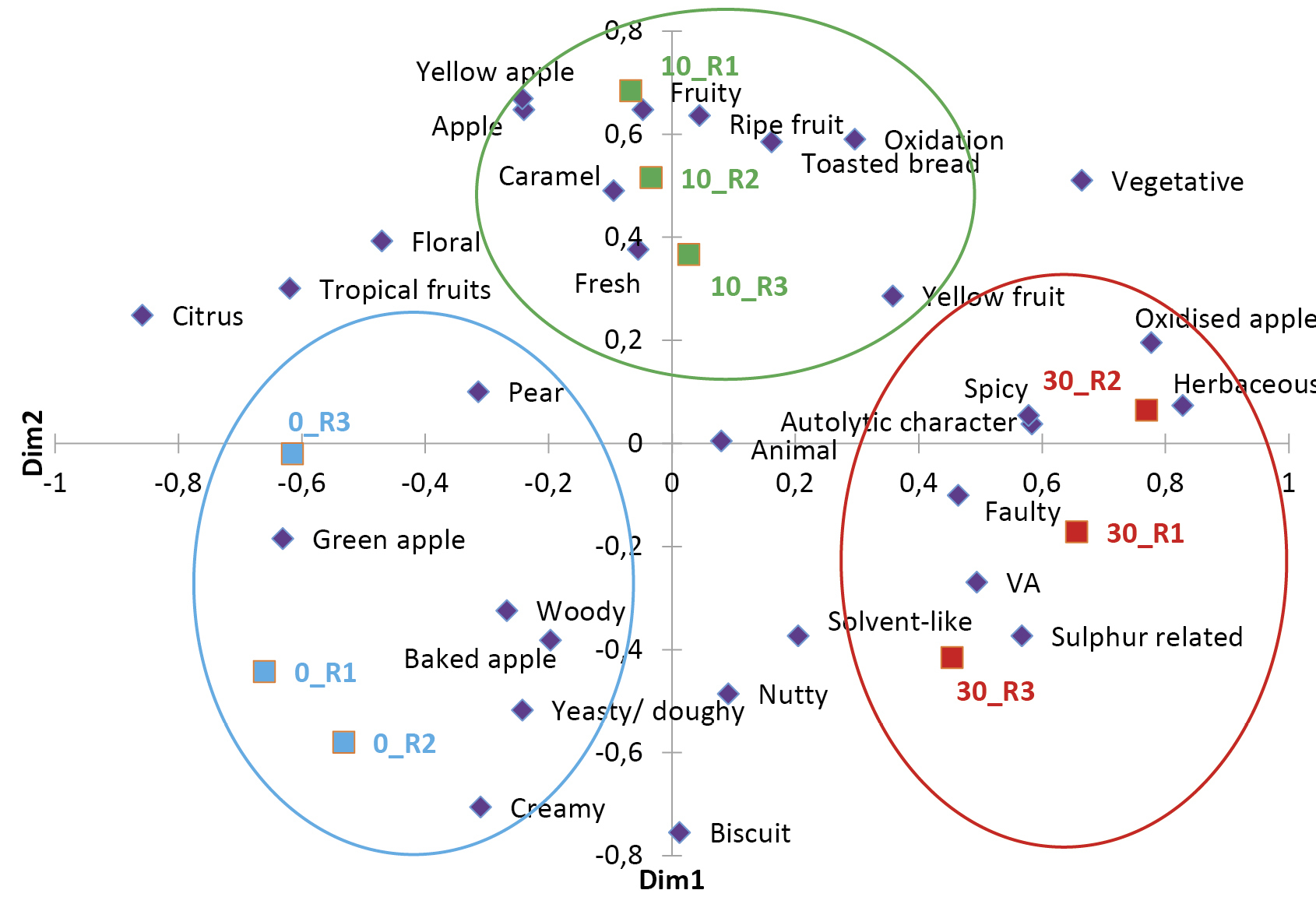 FIGURE 2. Scatter plot of aroma sorting results of MCCs made from grapes harvested from Darling in 2015 and stored at 0, 10 and 30°C with three repeats per temperature. The ellipses are drawn according to the AHC analysis.

Judges were unable to distinguish the taste profiles of 2014 and 2015 Robertson wines according to treatments (Figure 3). The study additionally showed that regardless of the judges’ level of expertise, on traditional sparkling wine in particular, they were able to detect differences in the wines’ aroma according to the temperature treatments. A control experiment where the grapes were processed directly as they arrived at the cellar could have helped to better understand the effect of the treatment relative to a “real case” scenario. 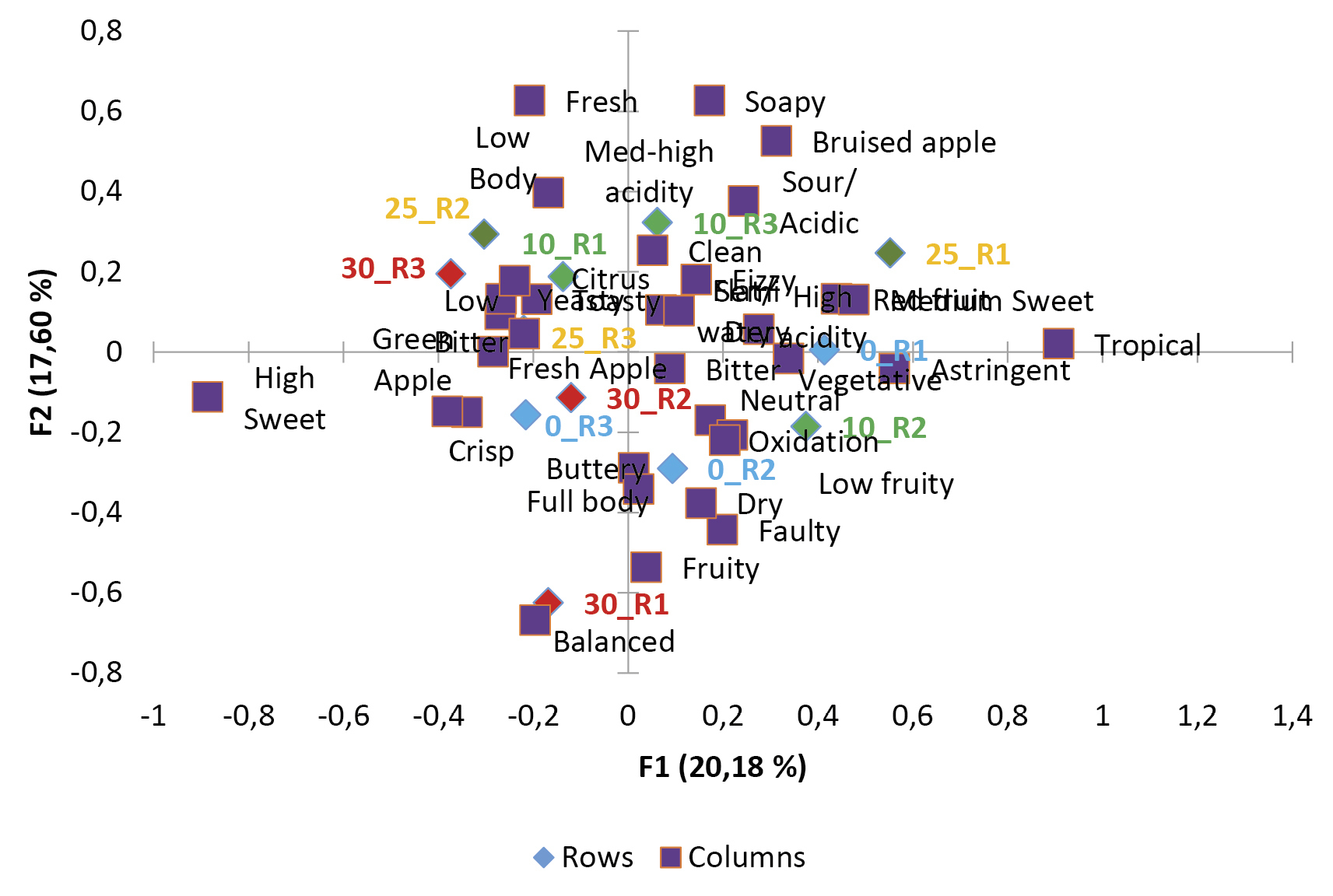 FIGURE 3. Correspondence analysis (CA) of taste sorting results of MCCs made from grapes harvested from Robertson in 2014 and stored at 0, 10 and 30°C with three repeats per temperature.

We investigated the effect of grape temperature, at pressing, on aroma and flavour of MCCs. Over two vintages (2014 and 2015), we used grapes harvested from Robertson and Darling, stored at 0, 10, 25, and 30°C before pressing to obtain traditional style Chardonnay/Pinot Noir MCCs. Using free-sorting, the aroma and taste of the nine-months old MCCs were evaluated. Grapes chilled at 0 and 10°C were generally described as ‘fruity’, ‘fresh’ and ‘crisp’, warm grapes (25 and 30°C) were described as having ‘oxidised fruit’, ‘volatile acidity’ and ‘solvent-like’ aromas. We showed that the grape storage temperature has a significant effect on the aroma of MCCs aged nine-months, but not a significant effect on their flavour/taste.

The authors would like to thank Winetech, THRIP and ARC-PDP for funding. They would also like to thank winemakers/cellarmasters/producers Craig Paulsen, Hannes Meyer, Pieter Ferreira, Lukas Wentzel and Charles Fox for assistance in the production of Cap Classiques. Special thanks to Dr Boredi Silas Chidi for his assistance throughout the project, as well as Prof Andrea Versari for his assistance with the proposal.