DISTRIKBLIK: The Pearl of the South African wine industry

*When lockdown restrictions eased up in late-2020-early-2021, WineLand journalists hit the open road to bring you a colourful overview of South Africa’s various wine routes and regions that forms part of our DISTRIKBLIK series.

With big, historical cellars and international brands like KWV and Nederburg in its midst, Paarl can rightfully lay claim to being the cradle of South Africa’s modern wine industry.

But the district is also dotted with private businesses and boutique cellars, underlining its resilience and diversity.

The Paarl wine region has seven producer cellars and 108 private cellars (2019), with 14 607 ha under vine. This constitutes 15.87% of South Africa’s total vineyard area, which makes Paarl the second largest wine region after Stellenbosch.

These seven cultivars represent almost 80% of all plantings, but there is also a lively interest in lesser-known varieties.

Besides their signature white Pinotage, Mellasat for example makes a Tempranillo that’s very popular with local consumers. “Obviously one has to plant varieties that are suited to your region, but it’s valuable for boutique cellars like us to offer something unique that makes you stand out and be competitive,” says Stephen Richardson, owner of Mellasat.

Like many other farms, Mellasat used the lockdown period to ask themselves hard questions about the future, and consolidate their strong points. “People immediately notice how different our wines taste, probably because I make wines with a European taste. I think that distinguishes us from the rest.”

Charles Back of Fairview owns restaurants in Paarl and Stellenbosch, but says Paarl is more resilient than tourist destinations like Stellenbosch or Franschhoek. “Paarl has a much larger local economy which is less dependent on tourism and students”.

His business model relies on Paarl’s good location – close to the N1 and within touching distance from Cape Town. With Fairview and Spice Route, his aim was to create free-standing destinations capable of attracting their own clientele – a quality that proved to be a definite asset during the Covid-19 lockdown.

It’s not surprising that Charles is now an even firmer believer in the merits of diversification. “Where wine tourism is presented in a less intimidating environment, it resonates with a larger percentage of people and a more representative cross-section of the population,” he says.

Could it be that local consumers have been forced out of their comfort zones over the past two years, into other categories?

To build relationships (and sell more wine), Fairview put their knack for innovative promotions to good use: for each day they couldn’t deliver wine, the farm added 1% discount to orders.

Ultimately this discount was capped at 25%, but it won consumers’ hearts and kept up the initiative. “Never underestimate the power of relationships,” Charles says.

Paul de Villiers is the fifth-generation winemaker on Landskroon where the family has been making wine since 1874. Their wines, with recently updated label, are exported to Tanzania, Zanzibar, China, the US (by a South African expat in Minnesota) and Europe.

Plans to attend ProWein was ruined by Covid-19, orders took a knock, and exporters and buyers have lost markets – with the next harvest imminent. “The surplus put a lot of pressure on bulk wine prices,” Paul says. “We’re trying to find new markets, especially for packaged wine.”

Huguette van der Merwe, Landskroon marketing manager, says she sees greater support from restaurants in the immediate vicinity than before. “It’s no longer only the big players that are willing to list local wines.” Their wines are also available in most chain stores and are very popular on Takealot and Wine.co.za.

At one of the largest producer cellars in South Africa, Boland Cellar, the focus on relationships and collaboration finds expression in a new corporate image and brand. Unlike smaller cellars and brands, producer cellars like Boland have to think wisely about how they can diversify without losing focus, says CEO Heini Smit.

“In line with our motto Together in Collaboration, we believe that we can unlock new opportunities through working with other companies in the industry. We would rather be a sustainable strategic partner in the value chain than take the lead. Relationships play a critical role and was probably the saving grace of many businesses during the pandemic.”

A core part of Boland Cellar’s vision is a deep conviction that a greater purpose should inform their products and decisions. “We believe investing in social and natural capital can lead to a more sustainable environment for everyone,” says Heini.

This focused approach finds expression in projects like Trees for Bees which has seen Boland Cellar partnering with The Bee Effect and the Greenpop Foundation for reforestation, to launch a fund for the conservation of honey bees.

Sales of the low-alcohol wine range, Melita, contribute towards making this vision a reality.

Farms that rely on accommodation, venues and restaurants, are still struggling. “We haven’t survived yet,” says David Retief, the fifth generation on the farm Pearl Mountain against the slopes of Paarl Mountain.

They were planning on launching their first organic wine range in 2020. New labels were put on the bottles a week before the lockdown, but the prospective buyers in Europe and Japan withdrew due to the crisis.

And because it was a new wine and new clients, there was no relationship or history to fall back on.

“There’s a growing need for organic and natural wine – it’s just going to take us longer now to find buyers,” says David. Without exports, he has to rely on the local market. “We look forward to reopening the restaurant and being able to host weddings here again.”

Jeremy Borg of Painted Wolf Wines is a man of many colours with an instinct for survival. He and his wife, Emma, moved to Paarl shortly after their wedding where he worked with Charles Back on Fairview.

The couple dreamed about a conservation project from day one.

Painted Wolf Wines was registered as a trademark in 2007, after thorough research. “To have any type of commercial influence and presence, an organisation has to control its narrative and niche domain,” Jeremy says, “especially if like me you have no heritage in winemaking or production. I just try to use my skills to further a good cause.”

Jeremy lost about a third of his turnover during the crisis, and had to consolidate and simplify his production in order to survive – this after he was counting on growth of 20%.

“Focus on the things you’re good at and take care of your clients,” is his advice. Jeremy cares about his cause and is surrounded by others who share his passion.

During the crisis a benefactor from New Zealand, for example, made a generous donation and Jeremy was able to pay his creditors. And with a slightly bigger profit margin from direct sales, he was even able to allocate a bigger donation to conservation in 2020.

He also managed to secure a new importer in the middle of the lockdown. A coincidental Facebook post about a particular challenge led to an order from Switzerland.

The person believed in Painted Wolf’s conservation efforts, but was also aware of the quality of the wines (the winery was named most successful producer at the Old Mutual Trophy Wine Show in 2019) and placed an order with immediate payment.

Coincidences like these go hand in hand with patience and hard work, and Jeremy has his sights set high. “My ambition for Painted Wolf is to become the most recognised and important wine company for conservation globally.”

Rhebokskloof was restored to its original glory with a modern touch, and after the renovation opened its doors early in 2021. The sprawling lawns are reminiscent of a green carpet and the vineyards beckon in the distance against the mountain slopes.

The new summer menu brims with fresh products. “It is something Covid-19 really made us aware of: the importance of supporting one’s local businesses,” says Jani Phiri, marketing manager.

“We fought tooth and nail against the impact of the pandemic and made sure we took care of our people. We trained our employees and reassigned them to the gardens, vineyards, packaging and bottling. When take-away meals became possible, we did deliveries and also built a pizza oven to be able to serve families affordably. We are very busy over weekends and I firmly believe we’re now reaping the rewards of our hard work and initiative.” 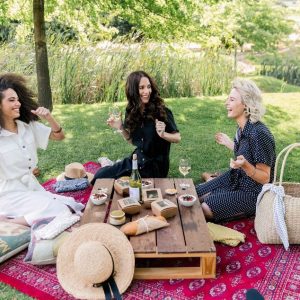 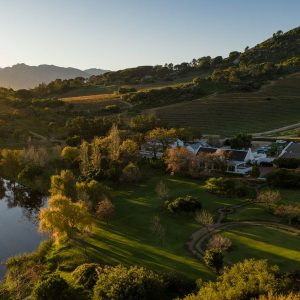 In the summer months they are open until 19:00 from Friday to Sunday to give visitors maximum opportunity to enjoy the tranquil atmosphere.

Under Oaks is one of the oldest farms in the country with a history dating back to 1695. It’s a working farm and exports all its products – mostly citrus and table grapes.

The world-class guest house usually has 90% occupation from October. “The fact that farming could continue, pulled us through,” says owner Theresa Britz.

Bertus Fourie has been making wine in Under Oaks’ historic cellar since 2014, when it was renovated. The wine can only be purchased online or at the tasting room, and is exported to Europe and California thanks to a relationship formed with ProWein.

Distrikblik: Under Oaks in Paarl.

With the friendly and intimate service, big open spaces, a magnificent view and a pizza oven, lack of visitors has never been a problem. “Over the years, we’ve built a reputation for value for money,” says Theresa.

The absence of tourists is a challenge for everybody. “It will help the Boland immensely if we could just get the Gauteng residents to come down for weekends!”

The Paarl Valley lies wide open. Who would refuse such an invitation?