Man and Machine: Agri-tech is here to stay, but is your workforce?

From your GPS to smart irrigation and the latest harvester, agritechnology is here to stay. But is your workforce? By Jana Loots 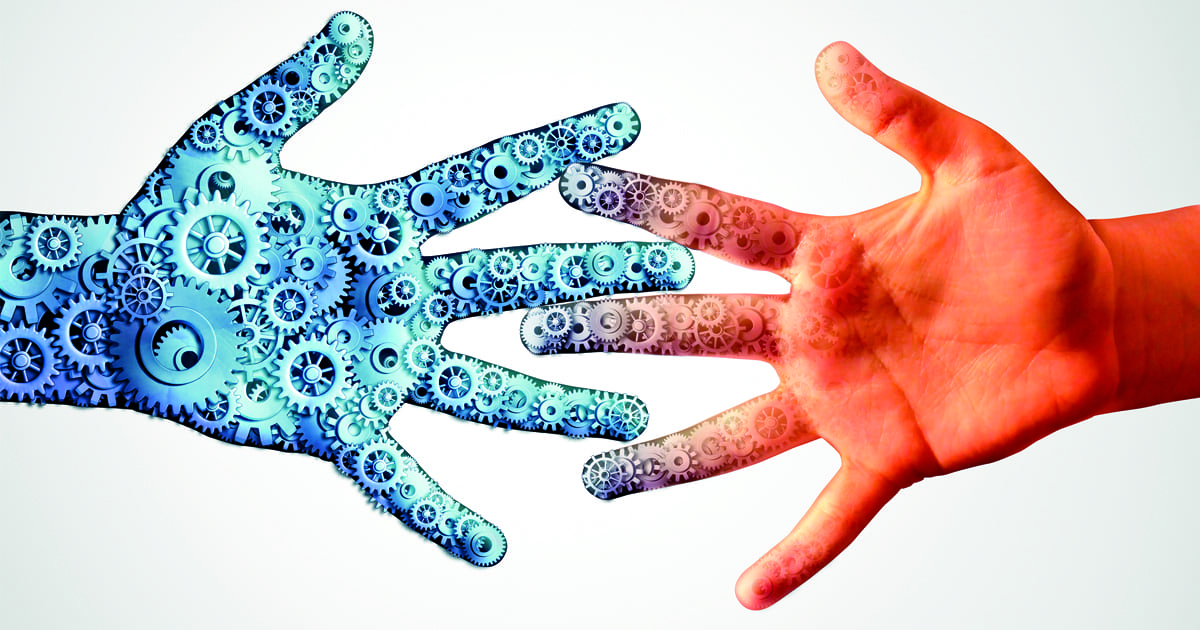 The Fourth Industrial Revolution (4IR) is upon us and agriculture is riding the technology wave. While agritechnology will increasingly drive productivity, quality and eco-efficiency, critics have warned the social impact is being downplayed.

“Based on the rationale that we must feed a rapidly growing global population, policymakers around the world are trying to understand how to achieve the sustainable intensification of agriculture; in other words, how to produce more food on existing land without damaging the environment or having negative social impacts,” says Dr David Rose, geography lecturer at the University of East Anglia in the UK, and co-author of Agriculture 4.0: Broadening Responsible Innovation in an Era of Smart Farming.

At farm level, the factors driving producers to adopt agritechnology include producing more with decreasing natural resources such as water; increasing yield, quality and nutrition while reducing costs; heeding calls from consumers for greater transparency and traceability of the products they consume; and keeping up with global trends.

What technologies are we talking about?

“Precision technology allows producers to measure variation and manage it accordingly,” says Pierre-André Rabie, senior agricultural economist at Vinpro. Some of the producers who performed well in the annual Vinpro Production Plan survey combine precision-based technologies which include, but are not limited to remote sensing, geographic information systems (GIS), near density vegetative index (NDVI), soil classification, nutrient mapping, soil moisture monitoring and smart irrigation technology. These technologies can guide soil, canopy, irrigation and nutrient management not only from one block to another, but also within a given vineyard block. “Apart from obtaining higher yields and quality from your vines, you can save on input costs and operate in a more environmentally friendly manner,” Pierre-André says.

Other forms of agritechnology include leveraging big data to guide decision making and using renewable energy applications to reduce the environmental impact of agriculture while making farms more competitive. Food preservation technologies monitor and prevent spoilage along with the development of smart materials for packaging, while biotechnologies aim to enhance nutrition, yields and resilience.

A trend that has been specifically prevalent in the wine industry is automation such as the mechanisation of harvesting or pruning. “We’ve seen a tremendous spike in mechanisation in the broader South African agricultural sector since the adoption of tractors and increasingly since the ’80s,” Pierre-André says. “The wine industry is no exception, with many actions in the vineyard, from the mechanisation of pruning, harvesting and spraying to canopy management, being done mechanically where the topography, trellis, wine style and economy of scale allows it.”

The introduction of these new technologies in the agriculture and agriprocessing sectors has many advantages, but also several unintended consequences.

“As technological advancements increasingly blur the lines between tasks performed by humans and those performed by machines and algorithms, global labour markets are undergoing dramatic change,” says Angus Bowmaker-Falconer, researcher at the Digital Economy Africa Research (DEAR) division of Stellenbosch University Business School (USB) and co-author of The Future of the Western Cape Agricultural Sector in the Context of the Fourth Industrial Revolution.

The technology revolution will bring more highly-skilled technical jobs into the farming sector thanks to the need for people who can build, monitor, operate and fix the technologies, David says. “However these jobs may not be accessible for semi- and low-skilled workers, and their displacement has the potential to change rural communities.”

The South African wine industry currently employs close on 290 000 people in the entire value-chain, making it an important employer. It also makes labour the largest input cost component at farm level. To address this issue in the South African context, reskilling and retraining opportunities for existing workers are vital to prevent unnecessary job losses in the sector and the initial focus should be on digital literacy, Angus says,.

“Tertiary institutions should also strengthen their agriculture education and training courses with the theory, skills and knowledge related to the 4IR, which will in turn attract the youth to agriculture as a technology-enabled sector.”

From theory to practice

Progressive wine grape producers have already realised the importance of making their employees part of the agritechnology revolution. Hannes and JC Erasmus of Wansbek farm near Robertson were the first producers to introduce a fully mechanised vineyard block in 2000. Now 70-80% of their vineyards are mechanised, including pruning, canopy and nutrient management and harvesting.

“Reducing the number of employees was never a consideration, we simply wanted to farm more efficiently by combining the latest technology with our team’s strengths,” JC says. The core team of permanent employees were upskilled, workloads are now less intensive, and the increased production and efficiency that resulted from the combined approach of man and machine enabled Hannes and JC to expand their business. “While the machines are busy, we can use the expertise of our team to plant and train new vines, something you want to do right from the get-go,” JC says.

Vinpro viticulturist Hennie Visser recently met a producer who introduced pneumatic pruning shears on his farm, which took the productivity of his small team of permanent workers to the next level. The men can now prune double the amount of vines a day, which leaves the women free to tend to other important activities on the farm, especially at times when priorities overlap among the various crops on the farm.

Mechanisation at farm level has been part of the Vinpro vineyard worker training courses for some time, Vinpro viticulturist and training manager Hanno van Schalkwyk says. “We stay up to date with the latest technologies and add the relevant skills sets needed for vineyard teams to be at top of their game.”

“Agriculture production and agriprocessing are strategically important sectors for the Western Cape, thanks to both their large absorption of labour and significant economic contributions,” Angus says. “In this context, the focus needs to be on inclusive economic development as opposed to a winners and losers scenario.” This includes stimulating the adoption of technology and development of technology entrepreneurs through research on the integration of technologies into the farming value chain. “The focus should be on the transformative potential of digital technologies for policy and education, and in the workplace,” he says.

“It’s the responsibility of both industry and particularly government to consider responsible technological innovation,” David says. Government can ensure that public funds for agritechnology development are used in a socially responsible way to provide successful applicants with guidance. It has less control over privately funded technologies and regulation often lags behind technological progress. But regulation may be the only good tool to influence design practices in the private sector.

“To achieve an ethical, transparent technology revolution we must consider impacts beyond those positive ones listed on the sales pitch,” David says.