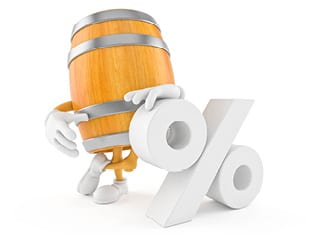 In a recently published study researchers evaluated the sequential inoculation of two yeast species compared to one and the effect it had on wine chemistry.

Previous studies have shown that fermenting juice with indigenous yeast can potentially increase the complexity of the wine due to the contribution of various yeast species.1,2,3 However, the lack of reproducibility and predictability of these types of ferments has led winemakers to opt for predictable commercial yeast preparations. The complexity provided by indigenous ferments can, however, be simulated to some extent by inoculating the must with “wild” yeast strains, thereby ensuring a large enough yeast population and desirable conditions. A sequential inoculation with the trusted alcohol tolerant, Saccharomyces cerevisiae, can then be done to ensure successful completion of the fermentation.

A study done in 2018 by Englezos and co-authors titled, “Volatile profile of white wines fermented with sequential inoculation of Starmerella bacillaris and Saccharomyces cerevisiae”, aimed to investigate the effect of these yeast strains (or combination thereof) on the aroma profile in four different white wine varieties.4

The varietals used in this study, were Sauvignon blanc, Riesling, Muscat and Chardonnay. There were two treatments for each cultivar:

The fermentations were conducted in 1 L glass vessels and the growth dynamics of the two yeasts during fermentation were monitored by plate count. Volatile compounds were analysed using GC/MS.

The ethanol production in the mixed inoculation treatment was slightly lower compared to the pure inoculation. This difference only amounted to 0.1 to 0.2 % v/v, however, similar studies (using the same yeast strains and inoculation delay) reported a larger decrease in ethanol content (up to 0.5 % v/v),5 which could hold significant advantages for the production of wines from high sugar musts.

The glycerol content was significantly higher for the mixed inoculations (9.3 g/L to 10.3 g/L) compared to the pure inoculations (7.8 g/L to 8.4 g/L). The higher concentration of glycerol in the mixed fermentations could contribute to the viscosity and palate weight of the wine,6 a property that is widely sought after.

The volatile composition showed variable results between the different varieties. The higher alcohol 2-phenyl ethanol (“rose” and “floral”), as well as 1-hexanol (“green” and “cut grass”), were higher in the mixed treatment for all varieties, however, the differences were not always statistically significant. The compound, isobutanol (“herbaceous”), were also higher for the mixed treatment, but only in the Sauvignon blanc and Riesling fermentations. For Chardonnay and Muscat, the pure inoculation resulted in a higher concentration of isobutanol, as well as isoamyl alcohol.

Esters are a very important aroma group responsible for the overall fruity aroma of wine. The ethyl esters (ethyl octanoate, ethyl decanoate and ethyl dodecanoate) were all present in lower concentrations in the mixed fermentation for all cultivars with the exception of Sauvignon blanc. For Sauvignon blanc, these esters were present at higher concentrations in the mixed treatment compared to the pure inoculation. A higher concentration of these compounds could contribute to a stronger intensity of attributes such as “pineapple”, “pear”, “fruity” and “floral”. The acetate esters (hexyl acetate, octyl acetate, 2-phenyl ethyl acetate and 3-methyl-1-butanol acetate) were all much lower for the mixed fermentations for all the cultivars. This could lead to decreased intensities of attributes such as “floral”, “honey”, “banana” and “fruity”.

Wine produced from mixed inoculations contained significantly lower fatty acids (octanoic and decanoic acid). These compounds are generally undesirable at higher concentrations, however, the concentrations reported in this study was not at a level where it would contribute negatively to the wine aromatic composition.

For Muscat, the mixed fermentation led to a decrease in terpenes and norisoprenoids, compounds responsible for contributing to the typical Muscat characters in wine. These results indicate that sequential inoculation using these specific strains could be detrimental to the composition and quality of a Muscat driven wine. However, the Riesling, a cultivar which varietal aroma also heavily relies on the presence of terpenes and norisoprenoids, showed no significant difference between the treatments.

Volatile thiols are very powerful aromatic compounds that contribute attributes such as passion fruit, grapefruit, tomato leaf and guava. In the present study, the mixed inoculation led to a marginal (but statistically significant) increase in the volatile thiol concentration of the wines. The effect of sequential inoculation on these compounds needs further investigation.

Significance of the study

One of the main advantages of using this sequential inoculation would be the preferred metabolism of fructose as opposed to glucose by Starmerella bacillaris. This could be used as a tool to lower fructose concentrations before initiating the fermentation by Saccharomyces cerevisiae, thereby reducing the risk of a stuck fermentation. Other than that, the potential lower alcohol production and the higher glycerol production could have additional sensory advantages. Another study did, however, report variable acetic acid and acetaldehyde production amongst strains7 and should be considered when considering this technique.

The findings in this study could contribute to diversifying wine composition, however, in many instances, the differences in concentration reported in this study is marginal and would likely not have any direct sensorial impact. The limitations of this study are that the wines were not sensorially evaluated using a trained sensory panel. These results would have been a valuable add-on and would certainly add weight to the reasoning behind using this technique. The variable results obtained between different cultivars also indicate the strong influence of inherent must composition on the outcomes of this treatment and the expected favourable results may not be obtained depending on the specific matrix.

They found significant differences in the concentrations of esters, higher alcohols, fatty acids, terpenes and volatile thiols. They also found the “wild” yeast used to be fructophilic and contributing to producing slightly less alcohol in the final wine.