2020: A Baptism of wildfire for wine producers

The catastrophic bushfires in Australia as well as the decimation of Lismore Estate Vineyards during the Greyton inferno has ignited new fears among producers during the dreaded ‘fire season’. 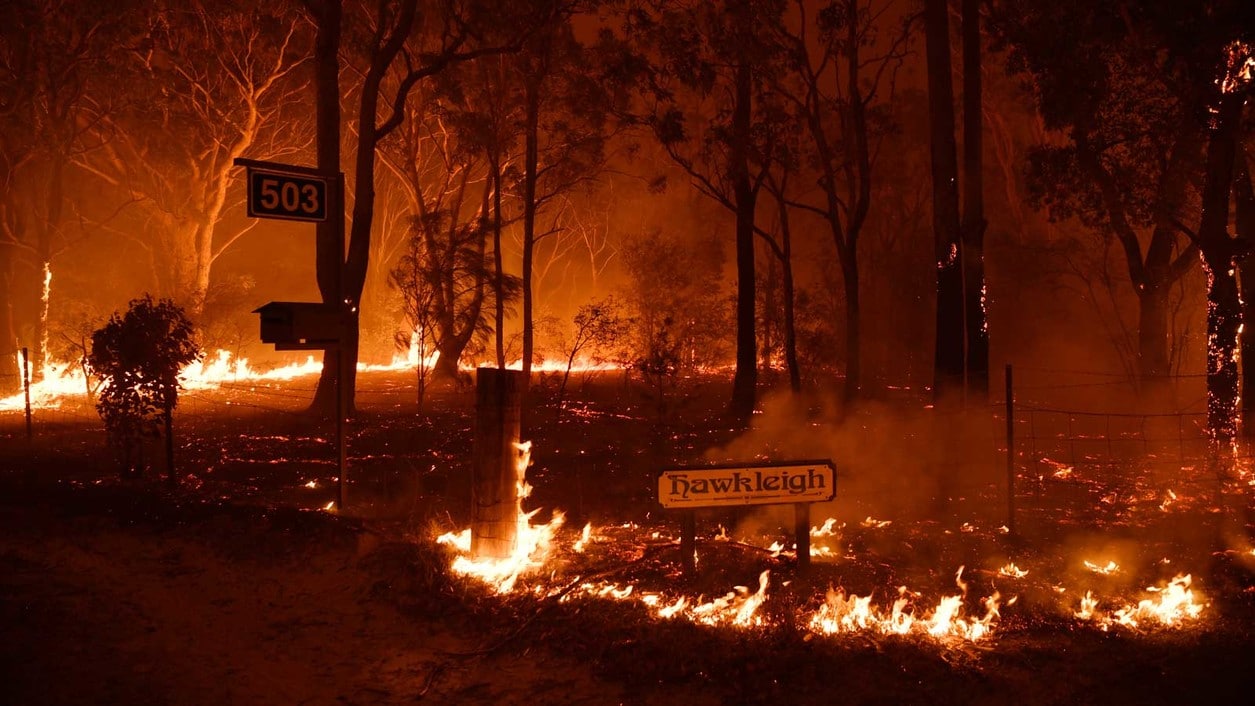 Australia is being ravaged by the worst wildfires seen in decades, with large swathes of the country devastated since the fire season began late last year. To date, a total of 24 people have died nationwide, and in the state of New South Wales, more than 1 300 houses have been destroyed. Nearly 500 million animals have perished and a total of 5.9 million hectares have been burned across Australia’s six states, reports CNN.

Authorities are struggling to contain the massive blazes, even with firefighting assistance from other countries, including the United States. Massive evacuations are currently underway in Victoria and New South Wales.

Australian wine writer and regular contributor for WineLand, Dan Traucki, describes the current situation in South Australia where he is based: “This is the biggest catastrophe in our history. The fires have already burnt out an area ten times the size of the Amazon fires. It has burned out an area larger than Belgium and prediction are that due to drought conditions, the fire will keep burning for another 6-8 weeks, but hopefully, not as intensely.”

Dan’s daughter is due to travel back to the capital Canberra, but flights are being grounded due to the conditions. “While Canberra doesn’t have any fires burning nearby, it’s located in a natural amphitheatre which has been swamped by smoke. The air quality there is rated as the worst on the planet at the moment, up to three times worse than Beijing or New Delhi. People are told not to go outside without a face mask or respirator.”

He says two local airlines have cancelled all flights in and out of Canberra for the next three days, and the majority of Government institutions have told staff to stay at home. “During midday, it’s as dark as a half hour after sunset.” 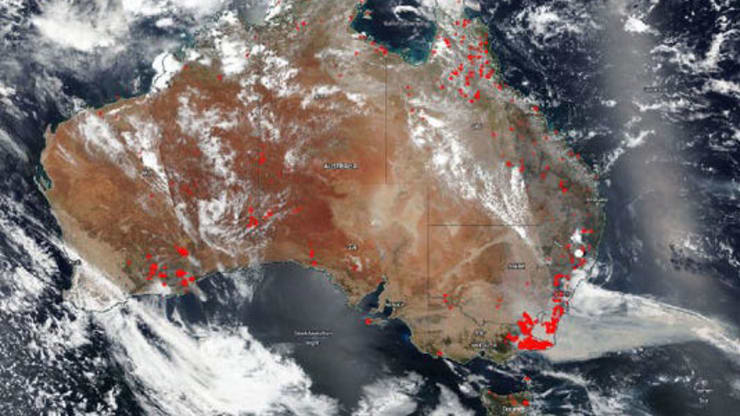 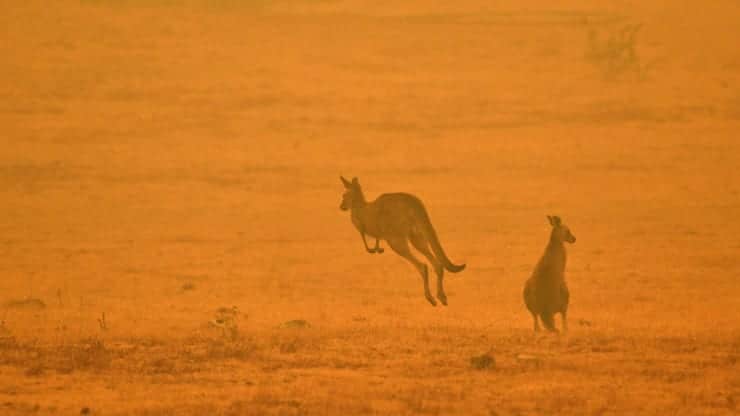 A kangaroo jumps in a field amidst smoke from a bushfire in Snowy Valley. Saeed Kahn | AFP | Getty Images 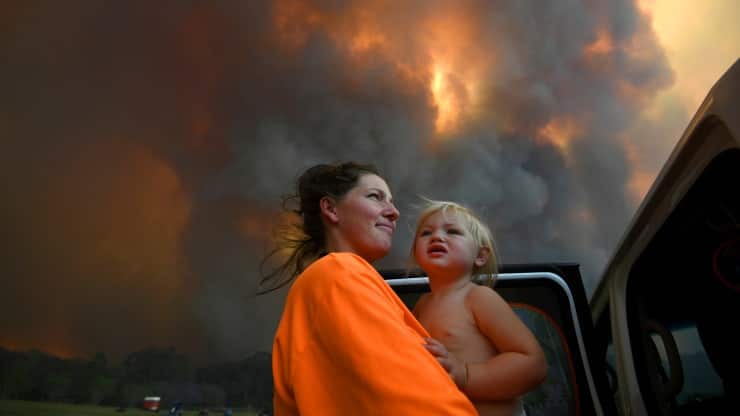 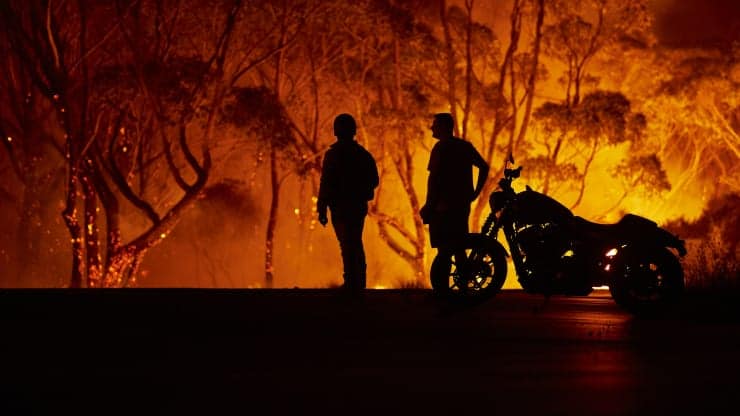 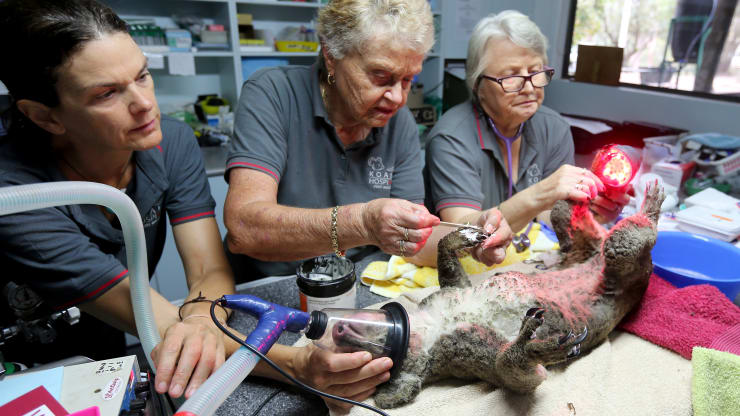 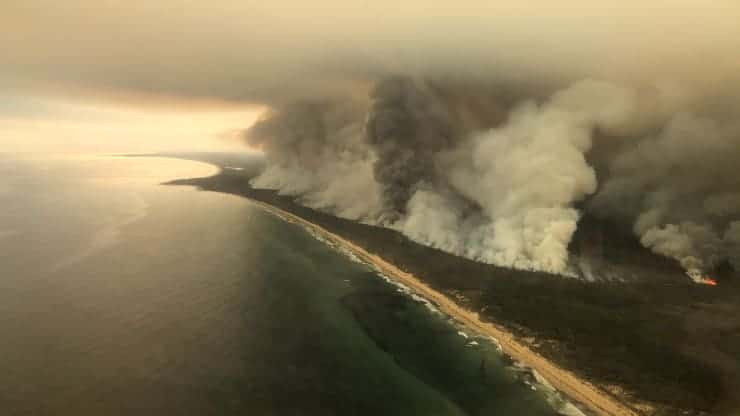 Wineries and producers in the Adelaide Hills wine region of South Australia have felt the heat of the flame. More than 60 vineyards and wineries have been impacted, with some vintners losing all of their grapes just a few months before the start of harvest.

Adelaide Hills is one of Australia’s best-known cool climate wine regions. It’s located in the Mount Lofty Ranges, and borders the Barossa Valley to the north and the McLaren Vale to the south. The region is home to 90 different wine labels with around 3 300 ha of vineyards.

Dan says while there has been damage to some vineyards in New South Wales (Hunter Valley) and Victoria (King Valley), the brunt’s been borne by the Adelaide Hills wineries, with around 1 100 ha (one third of the total hectarage) in “The Hills” owned by more than 60 growers/winemakers damaged or destroyed. “This particular fire was caused by a tree falling across power lines.”

“The resultant damage varies from the total destruction of Golding Wines and Tillbrook Estate – where the winery, all bottled stock, cellar door as well as vineyards were burnt out, through Barristers Block who lost all their vineyards, but managed to save the cellar door, including their stock. Bird in Hand, Artwine, Geoff Weaver, Vinteloper, Nova Vita and Anderson Hill all lost part of their vineyards.”

Dan’s latest update is that the newly developed ultra-cool region of Tumbarumba (with around 25 wine producers) on the foothills of Mount Kosciusko- Australia’s tallest mountain, has been ravaged by the fires with Johansen Wines reporting the loss of most of their vineyards, whilst Courabyra Wines reported the loss of around half of theirs. Other producers are currently under threat. “I strongly suspect that there will more such sad stories to come over the next few weeks unless by some miracle we receive drenching rain.”

According to a statement issued by Wine Australia, an estimated 1 500 ha of vineyards across Australia has been destroyed by wildfires, which is nearly 1% of the total vineyard area (146 128 ha).

The country’s wine sector is drawing together to provide support and advice to those affected by fire. Wine Australia, Australian Grape & Wine, the Australian Wine Research Institute and viticulture experts, backed by the Federal Government, including state and regional wine agencies, are coordinating a response that will offer support and advice in the short-term and a longer-term action plan.

According to Andreas Clark, CEO of Wine Australia, responses must include relief for those directly impacted, including those growers who might not be able to sell smoke-affected grapes. “In the medium term, we must look to strengthen regional tourism and bring people back to the regions,” he says.

“In some areas where people have been evacuated it will be some time before it is safe to access vineyards. There is also the fact that assessment of the impact on vines is complex. It’s easy to see when vines are burned but often it takes much longer to establish the damage caused by heat.”

In regions such as South Australia, New South Wales, Victoria and Queensland, individual vineyards and wineries had suffered devastating damage which would take years to recover and local regions and the broader sector would step in to assist.

“Sadly, it’s not the first nor the last time that Australia has dealt with bushfires. What we have seen in the past and no doubt will again in the future is an astonishing generosity where people have donated grapes and labour to assist their neighbours and friends to recover.”

Australia is hurting from the fires, “but we’re open for business. We need donations to the relief funds, support for our emergency services, and consumers to buy our wines and visit our regions.”

According to Wine Australia, it’s not yet possible to measure the full impact the fires will have on vintage 2020, which is due to start in the next few weeks. But Dan believes that the ongoing drought – which is the root cause of the fires – will have a significantly greater effect than the fire itself. “Early rough estimated are suggesting that the crop will be down between 10-20%.”

To donate to the Australian Red Cross, CLICK HERE or the Adelaide Hills in South Australia, CLICK HERE 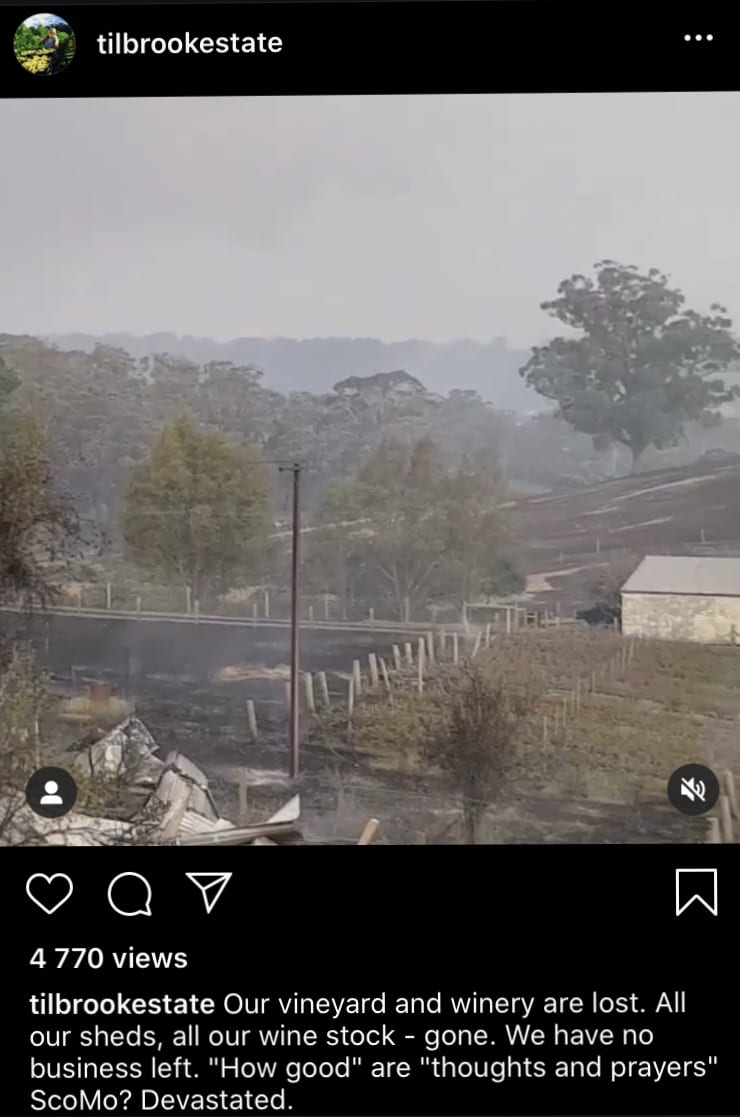 Some producers in Australia’s Adelaide Hills – like Tilbrooke Estate – took to Instagram to illustrate the damage caused by the wildfires. 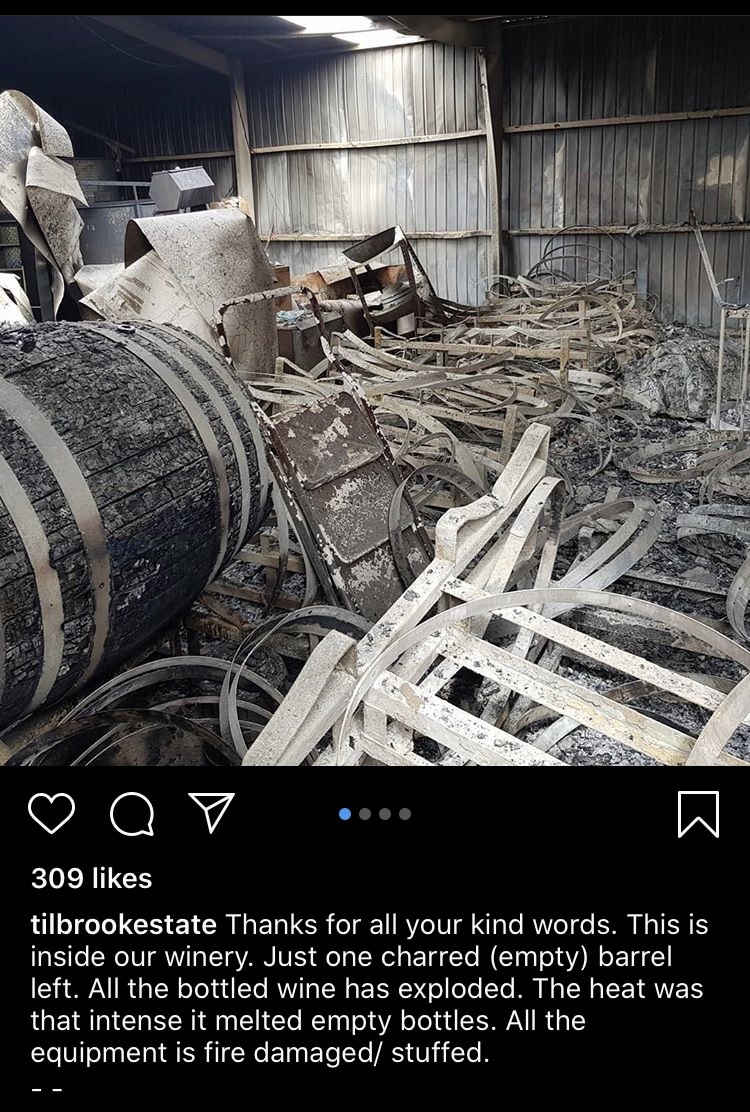 Some producers in Australia’s Adelaide Hills – like Tilbrooke Estate – took to Instagram to illustrate the damage caused by the wildfires.

Andrew Nugent, founder of the winery Bird in Hand, told Wine Spectator that “Total crush levels for wineries will be reduced. It will mean no income for many growers and significantly reduce income for many more.”

The fire burned through portions of Bird in Hand’s Shiraz and Sauvignon Blanc vineyards and threatened buildings on its estate, including the winery, an art gallery and restaurant.

Wine Spectator says the loss of this year’s crop could spell bankruptcy for some vintners. “Growers and wineries are in a particularly difficult spot in terms of finances after a 2019 vintage that saw a crop at least 50% below average,” says Nick Knappstein, brand manager for Riposte Wines.

According to him, three of the vineyards Riposte buys grapes from were so damaged that they will not produce this year. The trellises and irrigation systems will also need to be replaced. He estimates that 30% of the region’s vineyards will not bear a crop this year.

Anita says most properties are sticking by regional fire guidelines. “However, fires – driven by strong, hot winds – are severe enough to overcome most safety initiatives. Fortunately, the policy of evacuating rather than attempting rescue and firefighting has minimised loss of life.”

Messages of support and sympathy have poured in for Samantha O’Keefe, winemaker and owner of Lismore Estate Vineyards in the Overberg near Greyton, where a devastating wildfire – allegedly begun by children – has destroyed both her homestead and cellar.

WineLand spoke to an emotional Samantha on Tuesday. “I have spent 16 years of my life struggling against all odds to build Lismore. I’m so proud of everything I built and accomplished on my farm. In 45 minutes, all of it was destroyed. My home, my precious cellar, 40% of my vines and my entire 2019 vintage of wine is gone.”

But Samantha adds that the incredible support and donations received from not just people in South Africa, but many of her clients and friends abroad, has been nothing short of overwhelming.

“In the first moments as I was trying to comprehend what had just happened to my life, messages of love and support started pouring in from the South African wine industry. I have been so overwhelmed with the force with which my colleagues have rallied behind me, held me up and are moving me forward. Producers have not only donated money, but have sacrificed grapes of their own, cellar space, barrels and equipment to make sure I have a 2020 harvest.”

A spirited South African wine industry (including the likes of Andrea Mullineux and members of the Cape Winemakers Guild) rallied together to support the acclaimed winemaker and mother of two. Besides the R225 000 raised in less than 24 hours through a crowdfunding campaign launched on BackaBuddy, donations from wine industry members included barrels, vineyard machinery and equipment, grapes and cellar space.

“I did not know that such a capacity for selflessness and generosity existed in the world. It will forever be written into the history of our industry. I am so forever grateful.” 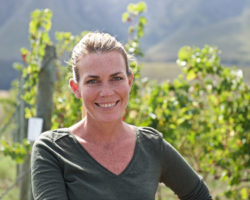 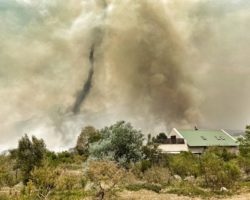 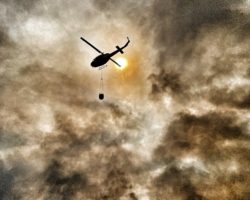 As in Australia, Western Cape summers are known for its hot, windy and dry conditions. Experts believe that with drier, hotter weather becoming the norm, even more wildfires could rage in the future.

In December, the Western Cape Government released it plan to combat fire season breakouts in the region, during the hot summer months. According to the statement, the government will be releasing 21 aircraft that will be on standby to tackle wildfires across the province. This includes nine water-bombing helicopters, four water-bombing airplanes and eight spotter command and control aircraft that can be deployed using 36 runways across the Western Cape.

“Every year, the fire season seems to be getting worse. Conditions across the province are still hazardous in many areas, following the devastating drought we have faced that caused lots of brush and veld to die. If the veld catches alight and the wind takes the flames, the results can be devastating,” says Minister of Local Government, Environmental Affairs and Development Planning in the Western Cape, Anton Bredell.

In the name of science

In the US, scientists are monitoring intentionally ignited bushfires to better understand wildfire patterns. By using computer models, laser scanning and drones to predict the behaviour of the flame, researchers can soon help prevent widespread devastation.

Wildland fires can burn with such intensity and energy that the fire can generate its own weather. The improved models and research could mean better predictions about where smoke is likely to go and when, which could get residents and rescue workers more preparation and evacuation time. 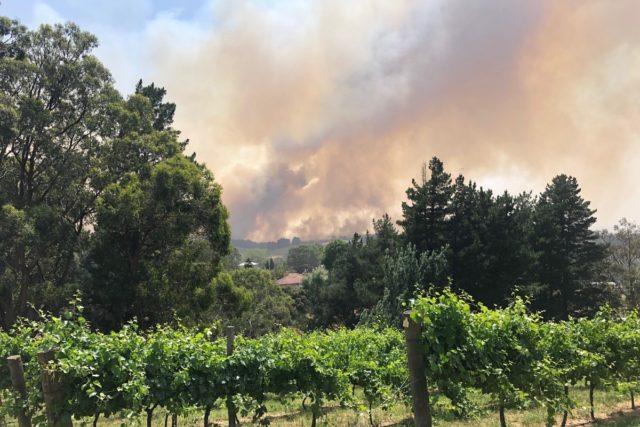